Disinformation spread with the name of the experts

Over the recent period, ISFED has investigated various types of technics designed for spreading disinformation and propaganda in social media. One of the mentioned tactics includes information-boosting by pro-government and false media outlets, based on  backstage sort of information firstly shared as Facebook posts by certain figures positioned as experts. Some media platforms never recheck facts before publishing articles. Along with that, involved agencies and experts often remain unchanged. These tendencies make us suppose that there is a purposive spread of disinformation. Moreover, this process can clearly be linked with an organized scheme, which can itself include other independent actors, that do not work this way on purpose.

The scheme for the spread of disinformation can be structured as follows: Certain people being loyal to the government, positioned as experts, tend to spread “exclusive backstage” information on their private Facebook pages. Pro-government media outlets and anonymous Facebook actors widely share facts without investigating its reliability. Furthermore, the falsehood of their posts has been confirmed several times in the past, by fact-checker organizations.

The above-mentioned scheme was used to spread misleading information on the 15th of March, that President Salome Zourabichvili together with the presidents of Poland and Hungary, was planning a visit to Kyiv and make a dangerous statement for Georgia. The information was firstly posted on Levan Nikoleishvili’s Facebook page and afterward, it was disseminated by the following media platforms: Imedinews.ge, Kvira.ge, Lid.ge, Npg.ge, Frontnews.ge, Tiflisnews.ge, Reportiori.ge, Rustavi2.ge, Tvalsazrisi.ge, Resonancedaily.com, Exclusivetv.ge, For.ge. This information has also been shared as a sponsored post on a false media platform – “Bog News” 1. Later, Salome Zourabichvili denied the above information in a post published on the official website. It is worth noting that, unlike Nikoleishvili’s post, president Zourabichvili’s this Facebook status has not been shared by most of the above-mentioned platforms. (Only Rustavi2.ge, Imedinews.ge, Exclusivetv.ge offered readers the correct facts.) 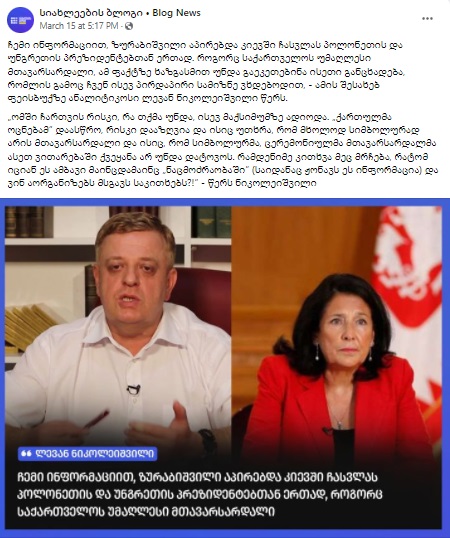 It is also noteworthy that, in the past, the same Levan Nikoleishvili has been a source of disinformation for pro-government agencies and discrediting Facebook pages for a number of times.  Along with him, other pro-government experts have been involved in spreading disinformation as well. For instance, Tamta Megrelishvili, Edisher Gvenetadze, Zaal anjaparidze and Zurab Kadagidze.

Examples of disinformation spread by “Experts”

The first source of information about Gakharia’s hunger strike was Levan Nikoleishvili. Later, the mentioned fact has been shared by the following agencies: Imedinews.ge, Lid.ge, For. ge, Reportiori.ge and Akhalitaoba.ge. This piece of information turned out to be a complete rumor – Giorgi Gakharia neither met Saakashvili, nor began a hunger strike. 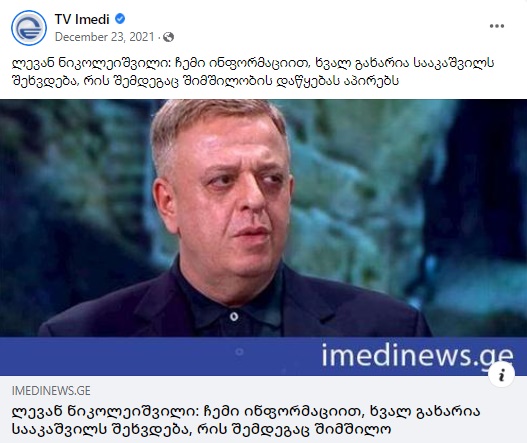 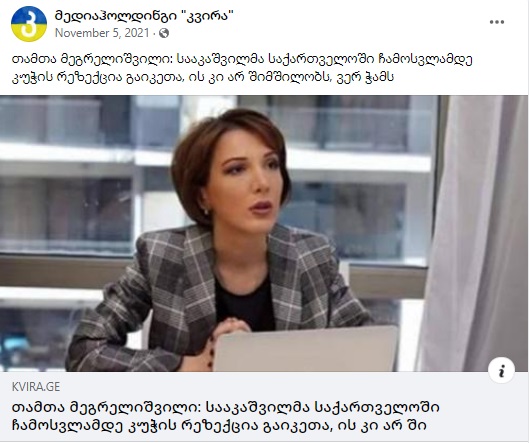 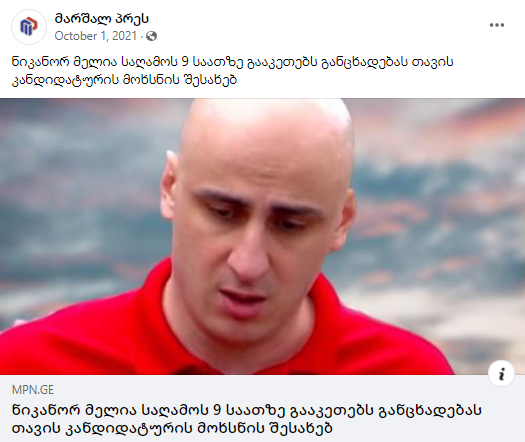 Pro-government Agencies are trying to avoid their responsibilities by referring to first sources-the figures positioned as experts. Nevertheless, it is crucial to remember, that media outlets are obliged to deliver only authentic and confirmed facts. A Facebook status cannot be perceived as a credible source, even if an author claims its authenticity.

As can be seen from the above examples, most disinformation media outlets not only do not offer the reader verification of the information, but also do not correct it after the disinformation is confirmed. Having monitored these tendencies, it can be supposed that this process is an integral part of well-structured, coordinated behavior. It is the agreed duty of a defined circle of experts to provide the desired disinformation or propaganda messages to government agencies.