Along the election processes, anonymous pages and fake accounts have been activated and / or created on Facebook, posting harmful information and sharing it in groups in a coordinated and inauthentic manner. They are trying to create information chaos about election-related topics and mislead voters. 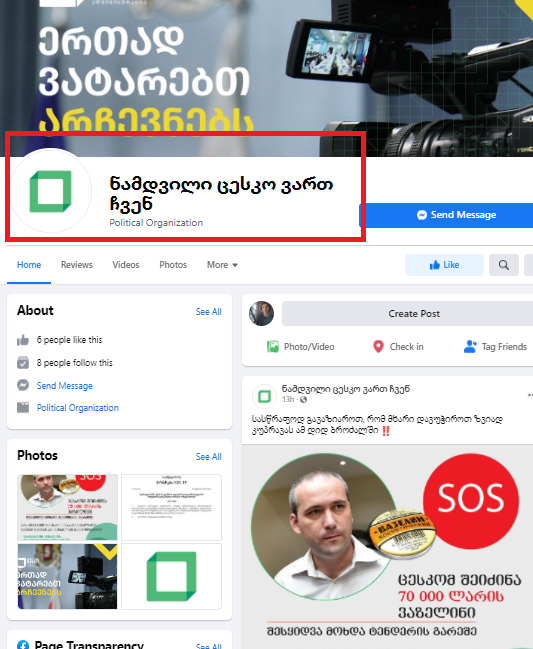 Pages: Informer, Time for truth, Power is in truth, Provocateurs, We are the real CEC

As a rule, the pages are managed by one person or a group and posted materials are then spread by fake accounts. The coordination of these pages is indicated by their targeted campaign, visual similarity of the posts and the mobilization of the same non-authentic accounts in the posts’ comment section or shares.

Mentioned malicious actors carry out a double information operation. On the one hand, these pages spread discrediting posts about observation organizations, opposition parties and media outlets that are critical of authorities, which is mainly followed by their criticism of the election administration. The purpose of the posts is to destructively portray all those who criticize the election administration. Suspicious accounts active at these pages share these posts in groups with thousands of members and try to reinforce the narrative with aggressive and offensive comments. On the other hand, the same coordinated pages and non-authentic accounts are involved in spreading false information about the CEC.

Each misinformation is to hyperbolize an already existing fact. For example, after accreditation of the Belarusian CEC members as an international observers, one of the pages shared misinformation that CEC had invited the Syrian Election Commission to observe, which was consolidated by a published falsified statement of the CEC chairman regarding the invitation of the chairman of the Syrian election commission and his two members.

The fact that the false criticism of the CEC is intentional is confirmed by non-authentic accounts’ mutually contradictory posts and comments. The accounts, on the one hand, express support for the election administration in their posts, and, on the other hand, share hyperbolized disinformation about administration in groups with thousands of members, mostly targeting opposition party supporters. 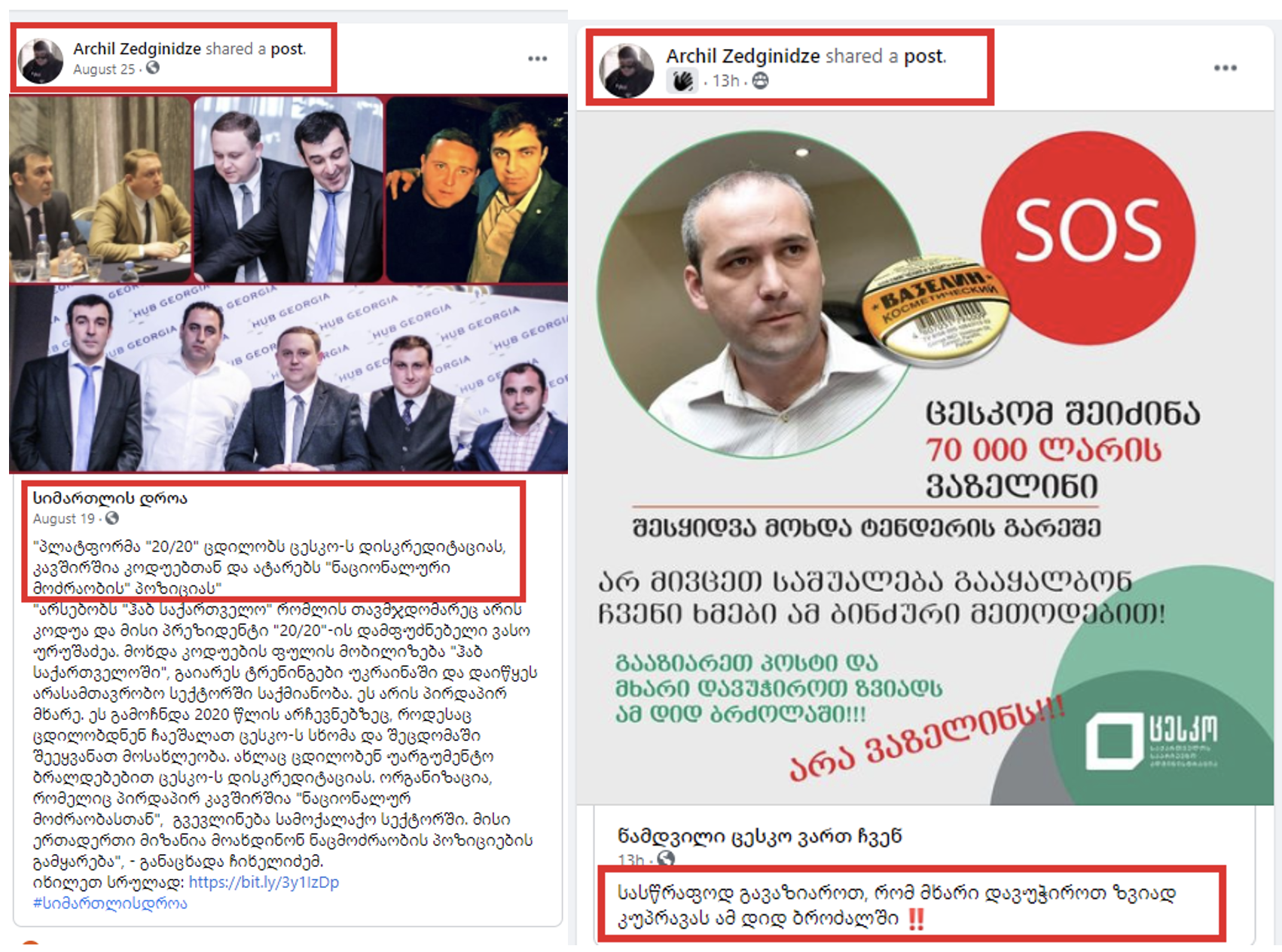 Image 1: Time for the Truth - “Platform “20/20” attempts to discredit the CEC, is affiliated with Kodua and holds the  National Movement’s position”. 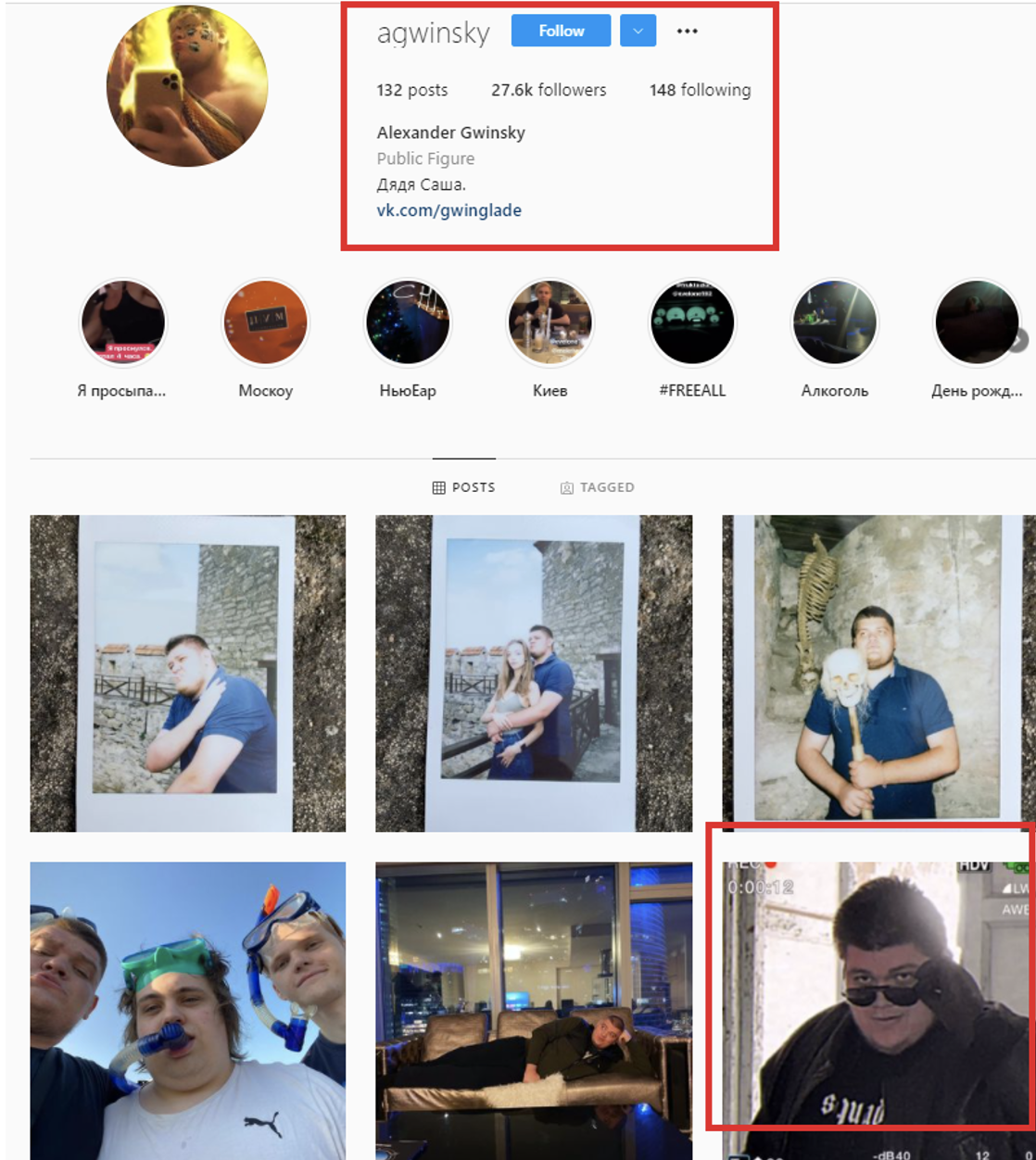 Many of the posts published on these pages serve to undermine trust in observer organizations. The target of the attacks is mainly “International Society for Fair Elections and Democracy”, but all organizations that criticize the CEC or the ruling party in any way become the target of anonymous discrediting campaign. ISFED has been object of abusive sexist attacks on its female staff and observers. Comments on posts on all five pages are written in the name of the same non-authentic accounts and then distributed to the groups in an organized manner. 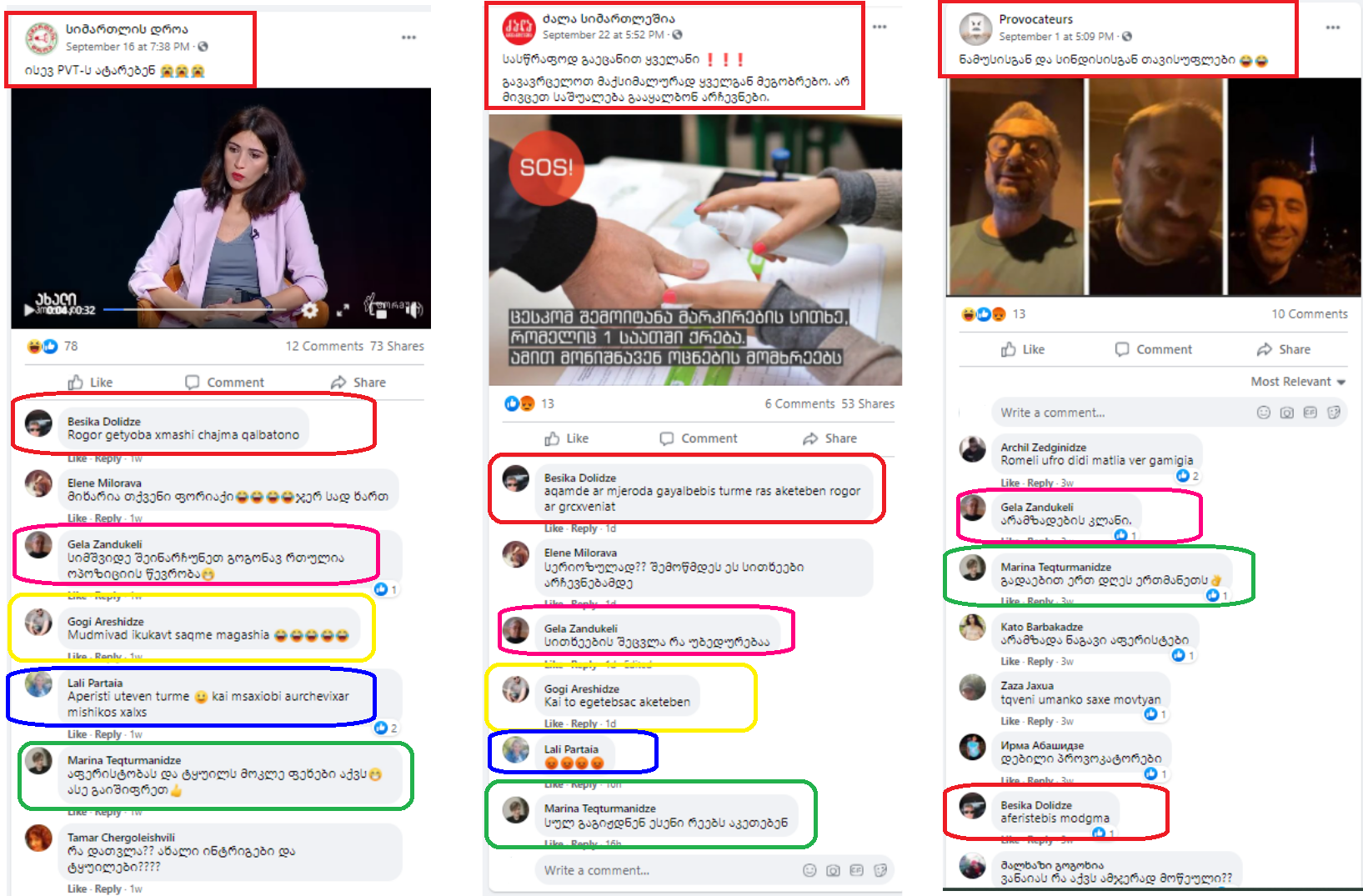 1. Time for the Truth – PVT is being conducet again

2. The Power is in the Truth – Everyone get acquainted immediately!!!My friends, let us share immediately. Do not let them rig elections.

In addition to discrediting observation organizations, well planned,  chaotic information campaign is obvious, which, beyond discrediting the election administration, also serves to portray it as a target of disinformation. 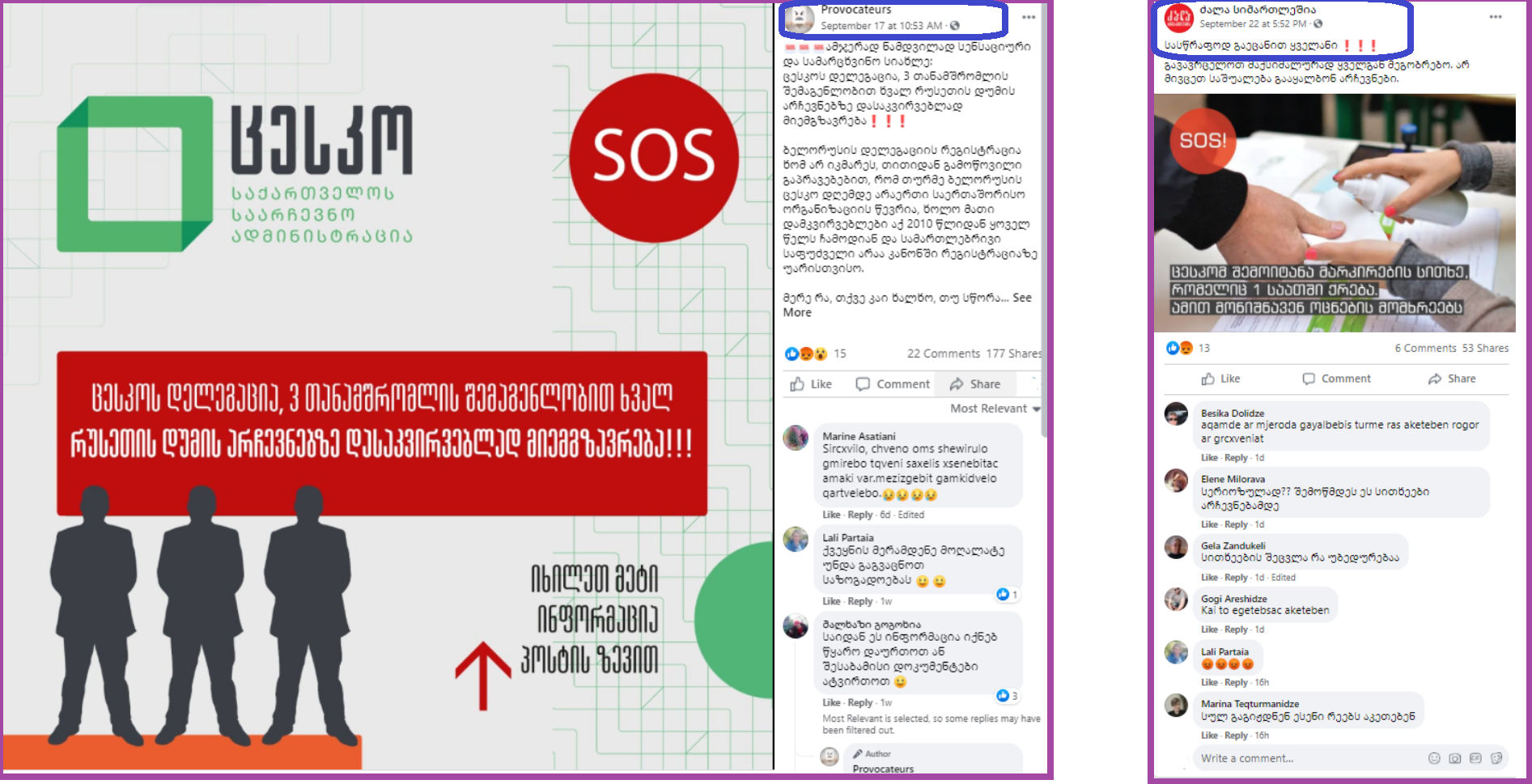 Provocateurs – Election Administration of Georgia . CEC delegation with 3 staff members leaves to Russia tomorrow in order to observe Russian State Duma Elections. Power is in truth - CEC brought the electoral ink, which evaporates in 1 hour. This ink will be used for supporters of Georgian Dream.

It is noteworthy that the fake accounts that share misinformation about the CEC, in parallel, interact with the real accounts on the official Facebook page of the CEC, support the election administration and attack users with critical views. The purpose of the people behind these non-authentic accounts on the CEC Facebook page is to support the election administration and to suppress any criticism of it. The accounts, in addition to supporting the CEC, also curse members appointed by the opposition. Most of them are recently activated (August – September). Their profiles indicates that they do not have organic activity. The accounts are registered under Georgian names and surnames, although the profile photos mainly belong to users of Russian social media platforms or Instagram.

On September 17, the page “Provocateurs” published a post alleging that CEC members were travelling to observe the Russian State Duma elections, urging the public to express outrage and react. On September 22, a disinformation post with the same visual and form was published on the Facebook page “Power is the truth”, according to which the CEC purchased evaporative election ink to use this ink against the “Georgian Dream” voters (The purpose of this post is to establish the opinion that the CEC is planning election ‘carousels’ together with the “Georgian Dream”). On September 26 and 27, the page “We are the real CEC” published two posts with similar visuals. One of them contained a falsified statement of the CEC chairman, while other allegedly quoted Zviad Kuprava. These posts were widely circulated by non-authentic accounts in various groups, including groups supporting media and opposition parties. The purpose of the disinformation posts is to provoke, irritate and undermine trust of these group member voters in the election administration and election procedures. From their activities it becomes clear that the aim of provocation is also to destructively portray the supporters of the opposition parties. Later, information about these provocative messages was posted on the CEC Facebook page, which formed the basis for the election commission to claim that the CEC was becoming a target of disinformation. 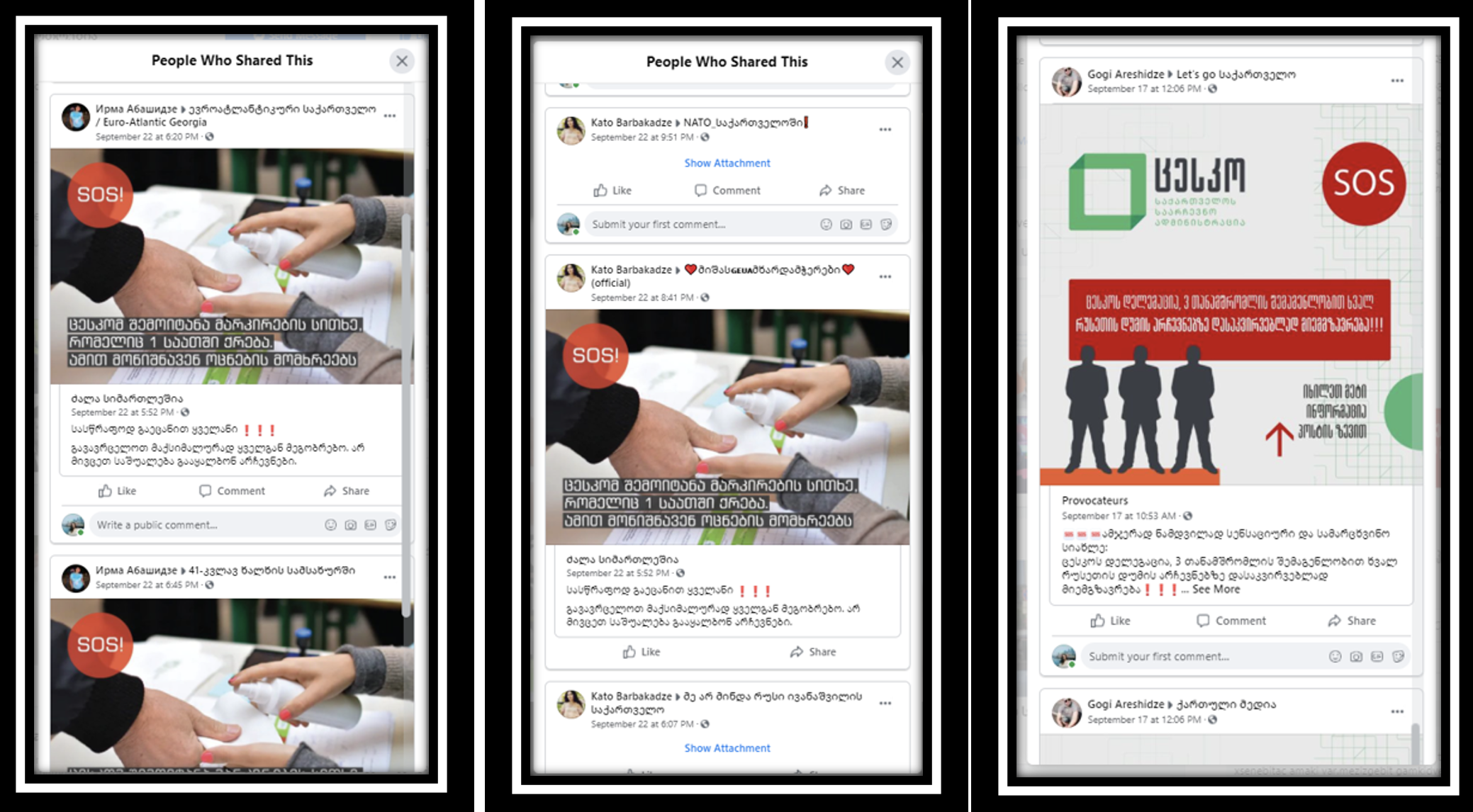 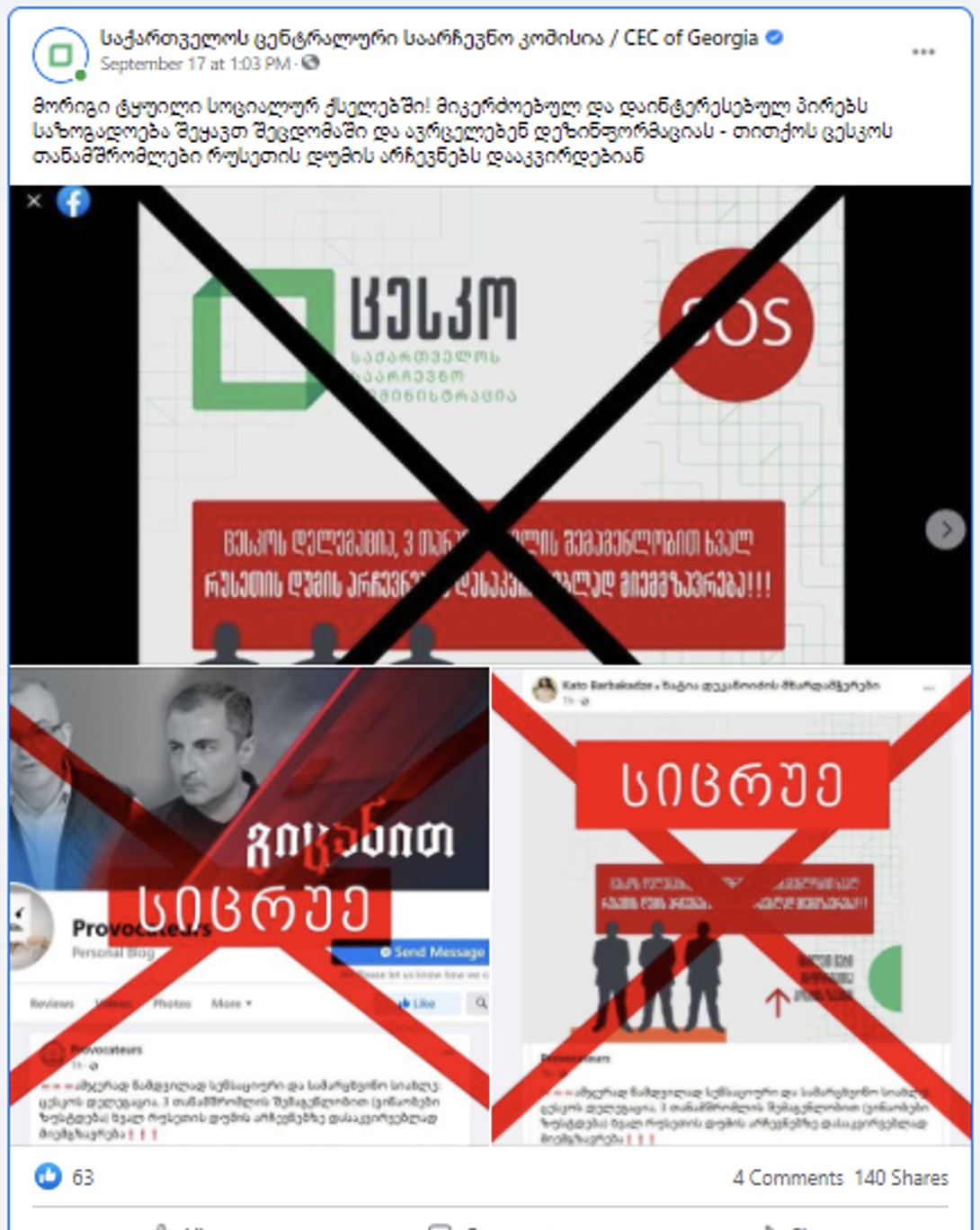 Another lie on social media! Biased  and interested groups are spreading disinformation and misleading society – as if the CEC members are going to observer the Russian State Duma elections.

ISFED outlined in its first report on Social Media Monitoring that most of the accounts linked to anonymous pages are inauthentic, for example:

The widespread disinformation about the elections on the coordinated anonymous pages, the chaotic and inconsistent responses from the non-authentic accounts indicate that we are dealing with a targeted information campaign.
“International Society for Fair Elections and Democracy” considers that this campaign aims to artificially create a background as if absurd misinformation allegations are being spread about the elections, thus covering up objective criticism. The people behind this campaign are trying to create information chaos, confuse voters and discredit critical opinions.