The unanimous opinion of pro-government experts: "We must impose retaliatory sanctions on Ukrainian high-ranking officials who ask us to join the war"

On October 20, it became known that the government of Ukraine imposed sanctions on members of Bidzina Ivanishvili's entourage. A few days later, the poet Davit Maghradze started talking about sanctioning the adviser to the President of Ukraine, Oleksi Arestovich. Pro-government Experts - Levan Nikoleishvili, Edisher Gvenetadze and Zaal Anjaparidze, also drew attention to the imposition of retaliatory sanctions. According to experts, Georgia should impose retaliatory sanctions on all those high-ranking Ukrainian officials who openly ask the country to join the war, including Oleksi Arestovich, Secretary of the National Security and Defense Council of Ukraine Oleksi Danilov, Member of the Rada of Ukraine Oleksi Goncharenko, Chairman of the Servant of the People - Davit Arakhamia and the President’s adviser Mykhailo Podolyak. According to pro-government experts, imposing retaliatory sanctions will be a defensive move on our part. 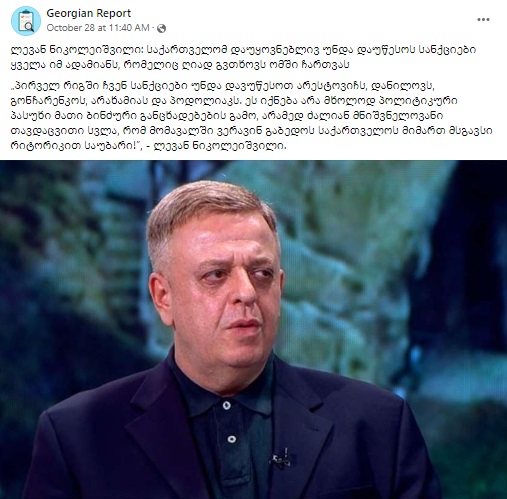 “Levan Nikoleishvili: Georgia should impose sanctions to all those people openly asking us to join the war...”

On October 25, the hearing of one of the Public Defender candidates, Ana Abashidze, was held in the Parliament of Georgia. In a POSTV story, Abashidze was accused of supporting the opposition and spreading messages against the Georgian Dream, as well as using hate speech and attacking the ruling party and its supporters. Posts against Abashidze were also found on anonymous pages. 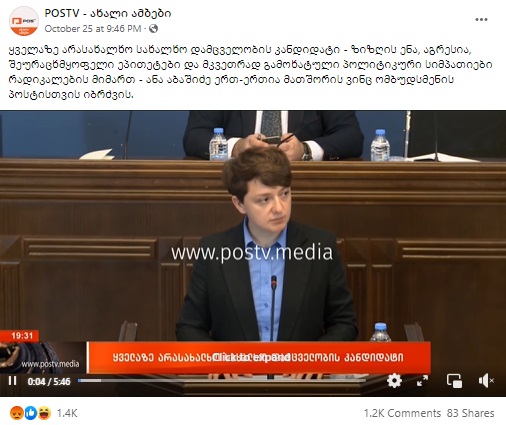 “The most anti-public Public Defender candidate...”

On October 24, the President of Azerbaijan, Ilham Aliyev visited Georgia, who was hosted by the Prime Minister Irakli Garibashvili. On the same day, the administration of the President of Georgia announced that Salome Zourabichvili was not informed about the visit. On September 25, the pro-government media and government related actors, spread discrediting messages of Salome Zourabichvili because of her statement. In the POSTV story, the statement of the president's administration was presented as damaging for the image of the country. It was also mentioned that the president forgets the competence priorities defined by the constitution and exceeds her authority, because Aliyev's visit involved meetings with the head of the government, Irakli Garibashvili. 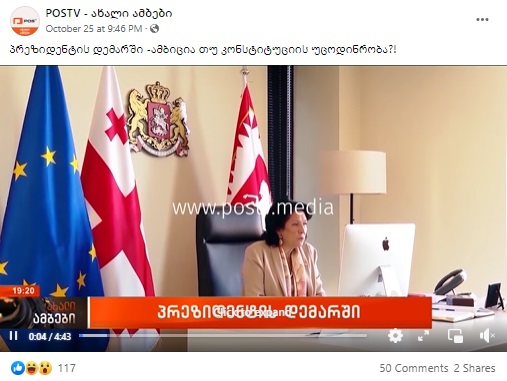 “Demarche of the President – ambition or ignorance of the Constitution?!” 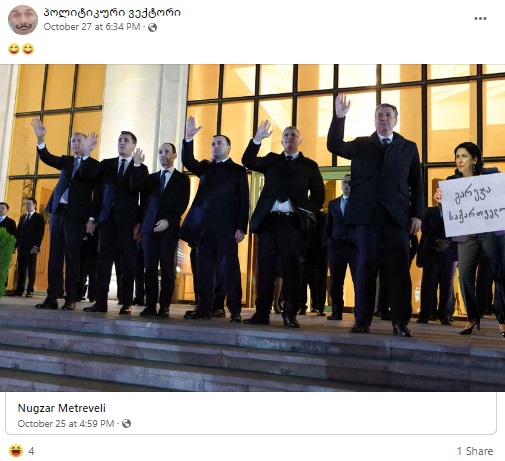 On October 31, Transparency International Georgia held a discussion on party financing issues with the participation of representatives of political parties, non-governmental sector, CEC and embassies, where, among other topics, Russian influences on party finances were discussed. After the discussion, POSTV prepared a story title "The third sector does not notice Khoshtaria's Russian funding", according to which Droa was not among the Russian funded parties in the Transparency International’s study. The media outlet broadcasted comments of Gigauri and the director of ISFED, Nino Dolidze, on the issue in order to discredit them. In connection with this, the communications department of the Georgian Dream published defamatory posts against the directors of the aforementioned organizations in the form of advertisements on their fb page - SinamdvileshiGD (In reality). 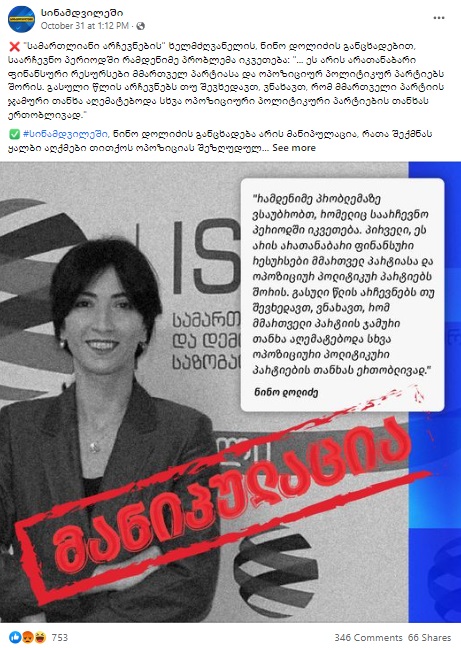 On October 26, three opposition parties - Droa, Girchi - More Freedom and Strategy Agmashenebeli - announced that they are creating a pro-European union, the goal of which will be to obtain the candidate status for EU membership and to defeat the Georgian Dream. After this announcement, discrediting messages against party leaders became more frequent, in which their incompetence and lack of rating were indicated. Zurab Japaridze issued a statement according to which the relevant structures of the European Union believe that the steps (not) taken by Georgian Dream were the reason for the candidate status rejection of the candidate status and that the assessment will be made public at the end of 2023, which will most likely be negative.

Some pro-government experts started discrediting Japaridze's statements. According to them, Japaridze claims that the European Union will not give Georgia a candidate status, because the country will not join the war. They also accused Japaridze, Khoshtaria and Vashadze of trying to hinder the country's European integration. 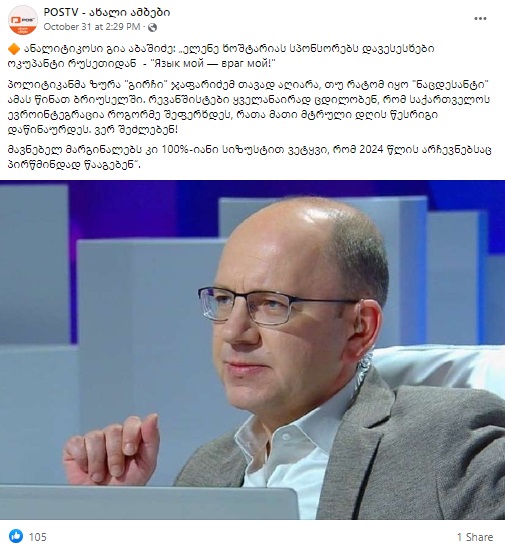 “The analyst Ghia Abashidze: “I will repeat from the sponsors of Elene Khoshtaria from the occupant Russia – My language – my enemy!”...”

About the weekly review

Within the social media monitoring program, ISFED presents the weekly overview and description of messages that echo political issues, (more or less) virally circulates on social networks during the week, and involves more than one actor, account or page in its dissemination. In certain cases, the most interactive posts of the week are presented.

For data processing, the organization uses the Facebook monitoring tool CrowdTangle and relies on the existing updated database of pages/accounts involved in discrediting campaigns.

The pages are available on the platform - www.disinfoobserver.ge