In spring 2020, after six months of monitoring News-Front Georgia on Facebook, the International Society for Fair Elections and Democracy (ISFED) concluded that the Georgian branch of the Kremlin's propaganda agency was operating with massive violations on the platform. Following this, Facebook deleted the News-Front pages, related accounts and groups operating in Georgian and other languages, which the publication used to spread pro-Russian government messages in different countries. News-Front, which was banned from the Facebook platform, later tried to circumvent the restrictions imposed on it through a network of new non-authentic accounts in Facebook groups. ISFED’s investigation found that the fake accounts, along with the New Front's pro-Kremlin and anti-Western messages, also shared material made by Spacesnews • სივრცეები. Following Russia's invasion of Ukraine on February 24, 2022, and the start of a full-scale war, the Kremlin's propaganda publication continues to spread messages in Georgia in favor of the Russian government, which is aimed at denying crimes committed by Russian forces in Ukraine and discrediting Ukraine and Western nations.

The agency News-Front was established by the order of the Federal Service for Supervision of Communications, Information Technologies and Mass Communications of Russia – Roskomnadzor on June 26, 2015. The agency's registration address is in Russian-annexed Crimea and the head and founder of the agency is Konstantin Knyrik. It should be noted that on February 23 of this year, in response to Russia's recognition of the independence of the so-called Donetsk and Luhansk People's Republics, the European Union, among with others individuals, imposed sanctions on Mr. Knyrik. In early March, Mr. Knyrik, along with three other New Front staff members and sponsors (Yuriy Fedin, Mikhail Sinelin, Yevgeniy Glotov), was added to the US Department of the Treasury’s sanctions list. The department said in a statement that the News-Front director was writing and publishing articles commissioned by the FSB.

During the Russia-Ukraine war, News-Front-related accounts in Georgian Facebook groups published materials in Georgian, which were mainly based on the opinions of the Russian government, pro-Kremlin figures, and pro-Russian Georgian actors (including Saqinform editor-in-chief Arno Khidirbegishvili and the founder of the Eurasian Institution, Gulbaat Rtskhiladze). Some of the messages touch on Georgia’s domestic politics, in the context of the ongoing war. 10 main messages that were spread from February 24 to April 4 are presented below.

According to ISFED’s observation, News Front links were shared 444 times in Georgian public Facebook groups from February 24 to April 4, 2022. Fake and authentic accounts related to News Front most often shared materials in the groups - "ბიძინა ივანიშვილის მეგობრები ფეისბუქზე“ (Bidzina Ivanishvili's Friends on Facebook) and "მოქალაქე“ (Citizen). The total number of Facebook users in these two groups is equal to 48,407 (however, this is not a unique number of accounts, as some Facebook users may be in both groups simultaneously). The group "Bidzina Ivanishvili's Friends" is run by Konstantin Chikviladze, who was also responsible for managing the previously abolished Georgian-language network.

* Number of posts that contained a link to the News-Front website: georgia-news.info

It should be noted that News-Front accounts distribute the materials in closed groups, the exact data of which are unknown. Among them is a group called „გასამართლდეს ნაციონალური მოძრაობა!“ (Judge the National Movement!), which has 7,011 members.

News-Front materials are spread in Georgian Facebook groups mainly through Konstantine Chikviladze and five non-authentic accounts (Mako Onoprishvili, Giorgi Solomonashvili, Nika Minjoraia, Nini Grigolashvili and Varlam Gorgodze). The profile picture used on the account named Nini Grigolashvili is also used by accounts on the Russian social media VKontakte – Leila Yusubova ad Natalia Terekhin, and by an account named Nadezhda Fadeeva found on the Russian search engine RuFinder.pro. The name of the two fake accounts they operate on differs from their Usernames, which means that in the past they started operating on Facebook under the latter names. In particular, the username of the account that operates as Varlam Gorgodze is Vaka Gorgiladze and the username of the Giorgi Solomonashvili account is Levan Chiaureli. 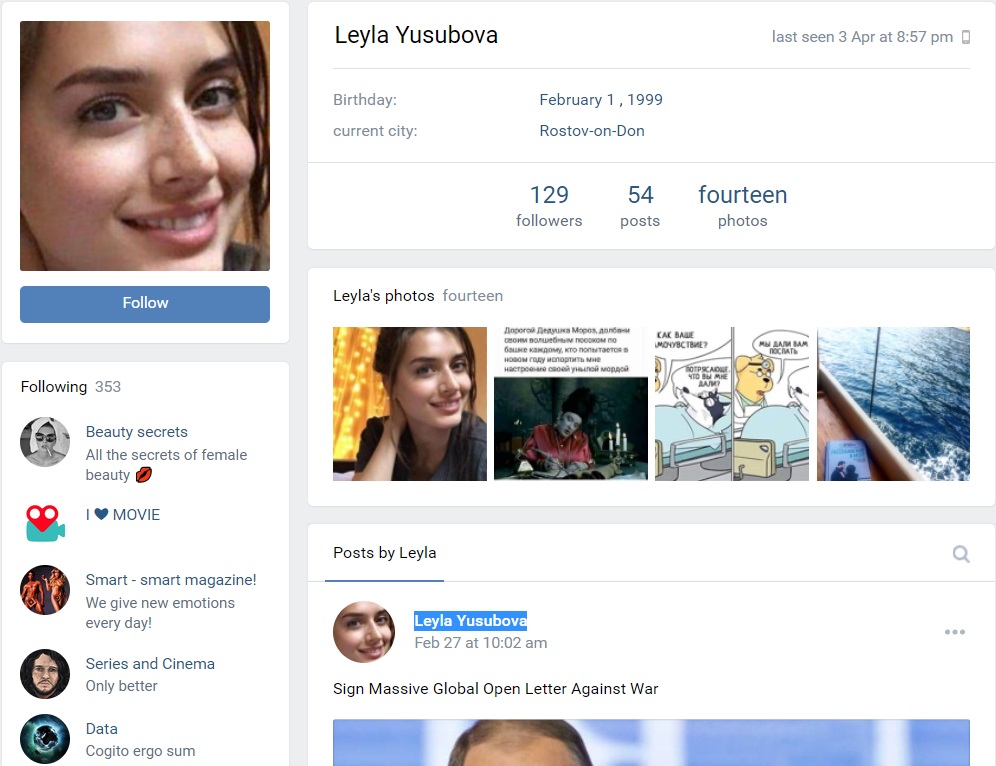 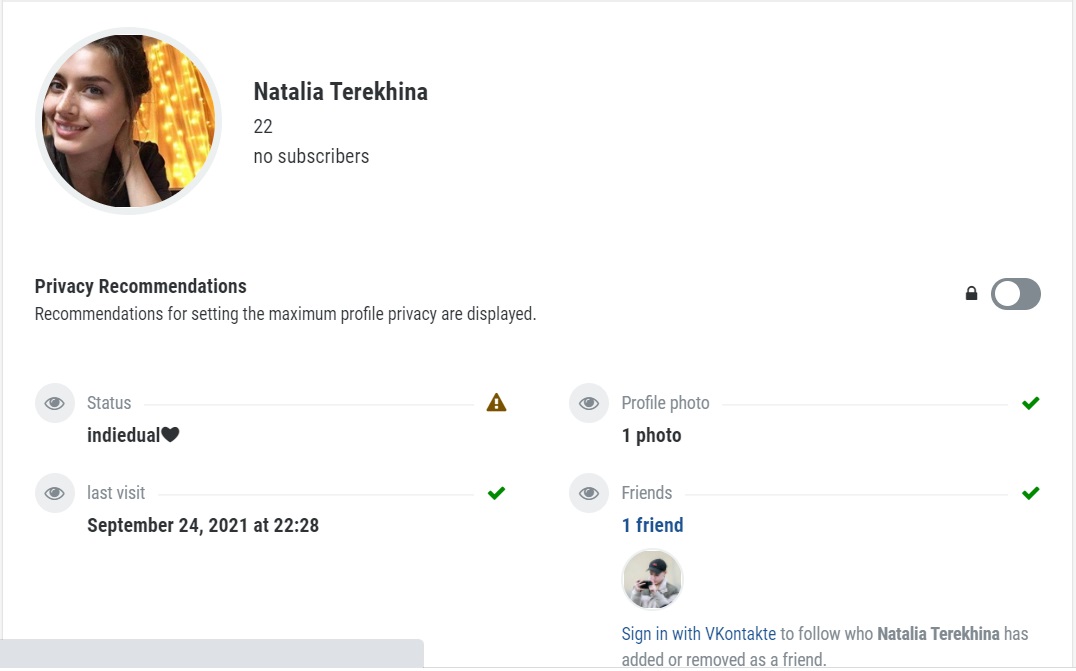 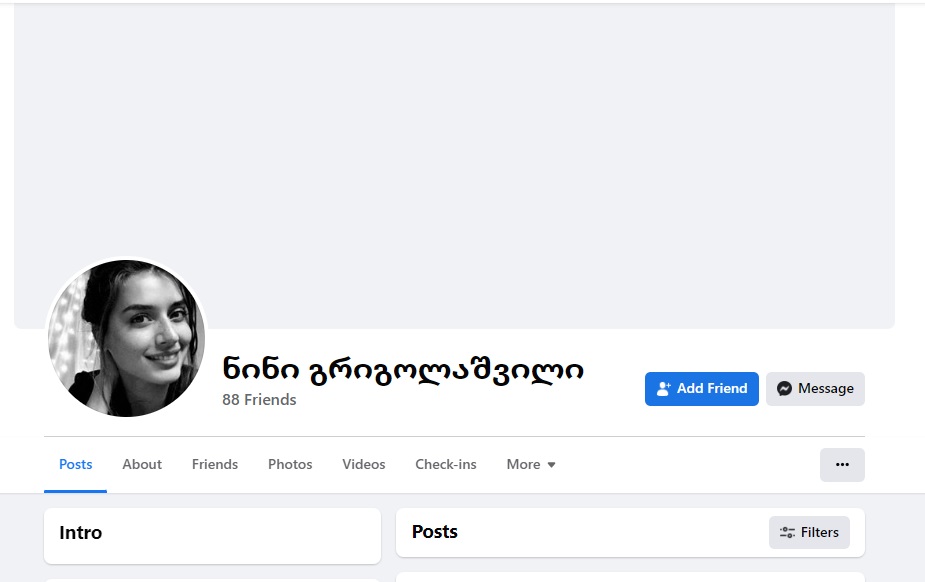 It should be noted that the fake accounts that disseminate News-Front materials are still in suspicious connection with the news agency "Spacesnews • სივრცეები" (spnews.io), whose sole owner and director, since July 2021, is Valerian (Vaka) Gorgiladze. In addition to the fact that Gorgiladze's name appears on one of the fake accounts, all the above-mentioned non-authentic accounts in the Facebook groups distributed the materials of Spacenews, along with News-Front, in an organized manner.

As the document shows, the Georgian-language material of News-Front continues to be spread on Facebook groups in violation of the rules of the platform. However, in addition to coordinated inauthentic behavior (CIB), there are signs of attempt of a hostile interference in country’s foreign policy. Propaganda by the agency during the Russia-Ukraine war, through the dissemination of information or manipulated information, is intended to justify Russia's invasion of Ukraine, deny war crimes, discredit Western states, and discourage citizens' allegiance to Euro-Atlantic integration. It is important for the country's security services and the government to take a notice of these attempts, no matter how successful/unsuccessful they may be, given that the EU and the US are imposing sanctions on Kremlin agencies.