Pages of false support have emerged as a weapon of political discreditation, aiming to confuse, mislead and disorient online users. Such pages are acting in a disguised manner. They pose as pages run by supporters of the very party, candidate or person whose reputation they intend to damage.

False support represents a propaganda method in which the sources are secret or disguised. Disguised propaganda aims to shape and manipulate perceptions.[1]

Distinctions are made between black and grey propaganda.[2] During black propaganda, disseminated messages are attributed to a false source and are presented as coming from a source inside the propaganda target. According to researchers Johan Farkas and Christina Neumayer, black propaganda implies that distributed message may be coming from the source that poses to be an opponent. The source may disseminate lies, fabrications or deceptions. In grey propaganda, it is impossible to identify the source.[3]

One of the most obvious examples of disguised propaganda is Martinlutherking.org website, launched in 1999 to disseminate racist messages. At first glance, the website appeared to be educational and scientific by claiming to provide information about the work of Martin Luther King, while in fact it portrayed him as a rapist and communist. This method was used not only to promote ideological confrontation but also to discredit political candidates.[4]

The phenomenon of false support is actively used in Georgia as well, targeting undesirable persons or groups. Recently disguised campaign against activists that oppose Namakhvani HPP has been gaining momentum. The campaign is using different fake messages to disorient supporters of the protest, including by suggesting that there is a connection between the activists and a pro-Russian politician, Levan Vasadze.

Following a rally staged by Rioni Guardians at the First Republic Square in Tbilisi on May 23, false support pages on Facebook began to disseminate fake photos for discrediting the protesters. In addition, a disguised propaganda page „Association of Patriots Iberia“ launched a sponsored overt propaganda campaign with nationalistic messages.

On April 27, 2021, a disguised propaganda page called „Support to Rioni Guardians“ created an eponymous Facebook group. As of May 24, the group has 698 members. Posts published by the page are actively shared in the group, to increase access to the target audience. 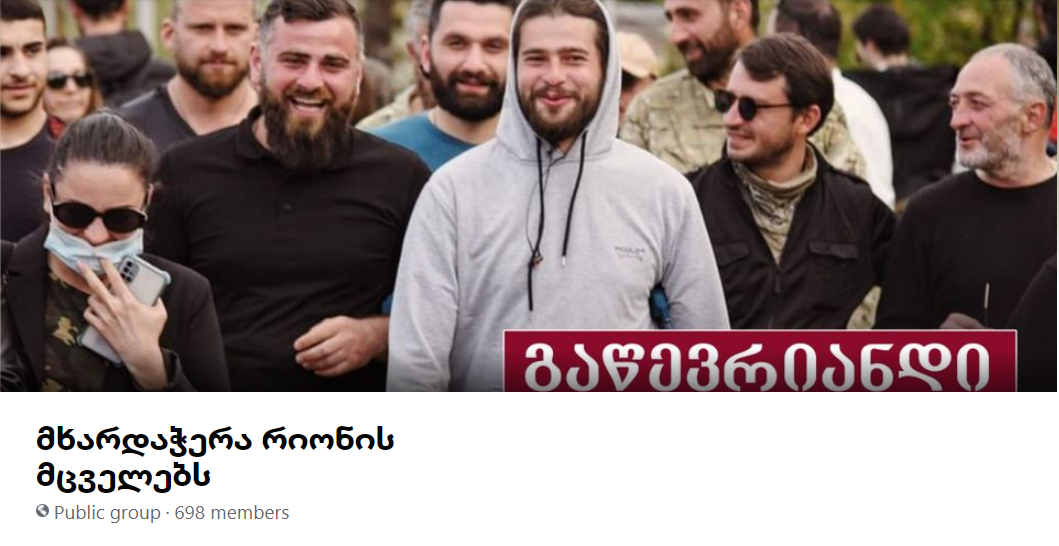 In May 2021, disguised campaign was actively used to discredit politician Nika Melia. Following his release from prison, a Facebook page that pretends to support the National Movement ჩვენ გვიყვარს მიშა  [We love Misha] published a post in which Nika Melia is compared to Nelson Mandela.[5] The post was published as an ad, without a disclaimer. Notably, in almost all cases, use of such tacticmanifests into dissemination of sponsored posts by fake pages. Based on its monitoring, ISFED has found that the page was active during the pre-election period as well. It should be noted that the post targeting Nika Melia was shared in the form of a screenshot by a page called „Corridor of shame“, which is actively involved in discreditation of the opposition. This demonstrates once more the post’s disguised goal. Additionally, screenshot of the post was published on pro-governmental Facebook pages that operate against the opposition, in order to increase post views and disseminate propaganda messages.

Disguised propaganda tactic has been actively used in Georgia since 2017, for discrediting political processes and conducting anonymous election campaign on social media. A false support page appeared for the first time prior to the 2017 local self-government elections and became especially active for the second round of the 2018 presidential elections.

By December 20, 2019, before Facebook’s operation to remove pages in Georgia, ISFED had identified 16 pages involved in a disguised campaign. They were acting on behalf of and therefore, against the United National Movement, Lelo, Movement Shame, the united opposition platform for the election system, former Chkondidi Bishop Petre Tsaava. These pages did not publish a lot of posts but rather, they disseminated equivocal, misleading posts as political developments were unfolding and sponsored them massively.

Similar campaign was also evident during the 2020 parliamentary elections period, when four false support pages were operating. They posed as supporters of the United National Movement, its members and Mikheil Saakashvili, as suggested by their names and disseminated messages. However, in reality, these pages were operating for the purpose of discrediting them. 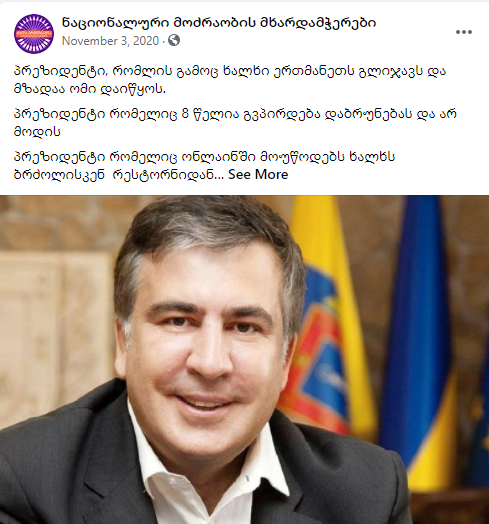 In 2019, after Mamuka Khazaradze announced that he founded a political movement, the tactic of false support was used against him. A page called „Our support to Mamuka Khazaradze“ shared a post to make it seem that Khazaradze and his team-member Badri Japaridze compared themselves to Ilia Chavchavadze and Akaki Tsereteli. Notably, majority of feedback did not question authenticity of the page and the post and expressed clearly negative attitude toward the comparison. 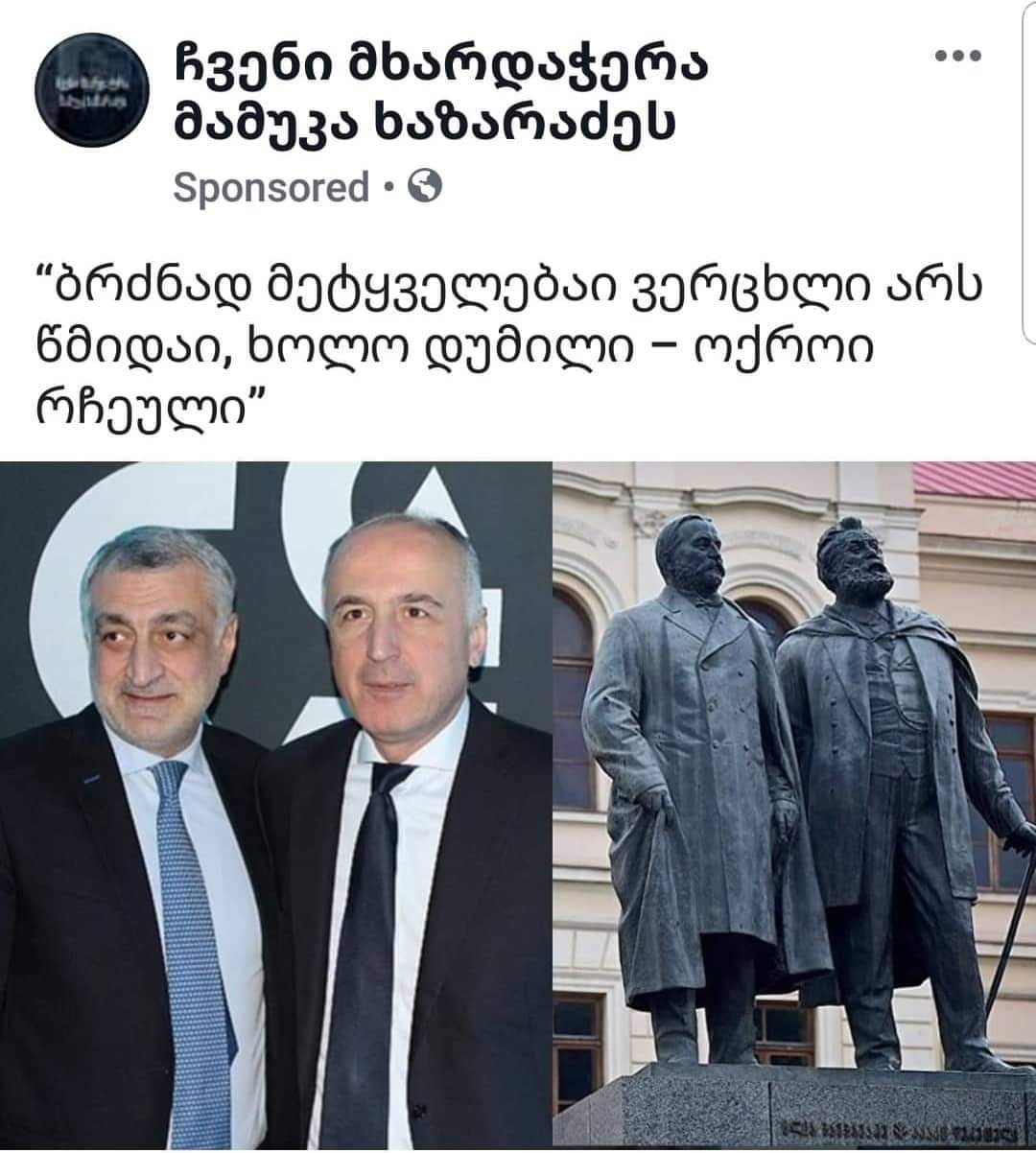 Our support to Mamuka Khazaradze - „Speech is silver, silence is golden“

Later the page uploaded additional photos of Mamuka Khazaradze, which then became a source of sarcastic feedback from other discrediting pages. In addition, Ghia Abazhidze, who is associated with the ruling party, shared post screenshots in a negative context on his personal Facebook page, in his capacity as an expert. He also shared one of the screenshots in different Facebook groups. Soon he posted a status saying that it was all part of an experiment to find out how convincing the material was for Facebook users. The fake page was removed for coordinated inauthentic behavior on December 20, 2019, together with other pages posing as supporters of Khazaradze.

A false support page „Public Movement Supporters of Lelo“ and „ლელო • სიმართლისთვის“ [Lelo for the truth] were also operating against Lelo. The latter was also removed during the Facebook purge on December 20, 2019.

Following the June 20, 2019 developments, in parallel with protest rallies on Rustaveli Avenue new false support pages became active on Facebook. A page called „ნუ მაბრმავებ“ [Don’t make me blind] was created on June 22, followed by a page called „მე ვენდობი“ [I trust] the following day. For the purpose of discrediting the rallies, these pages demanded on behalf of the rally participants that the protest be led by the National Movement and the European Georgia leaders and expressed support toward them. Notably, during the very same period, one of the main messages of a sponsored Facebook campaign against the rallies was association of the protest with the political parties in question. 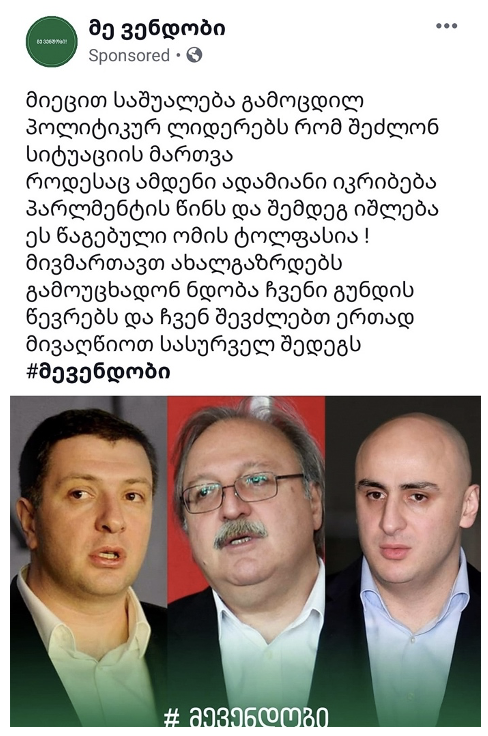 Based on its monitoring, ISFED found that 8 false support pages were active during the period of the 2018 presidential elections. They mostly targeted the UNM presidential candidate. One page was acting on behalf of the Georgian Dream-backed candidate Salome Zourabichvili. This page published posts similar to those of Zourabichvili’s official page, as well as a post that supported Russia. However, since the post was not sponsored, it did not have much engagement. 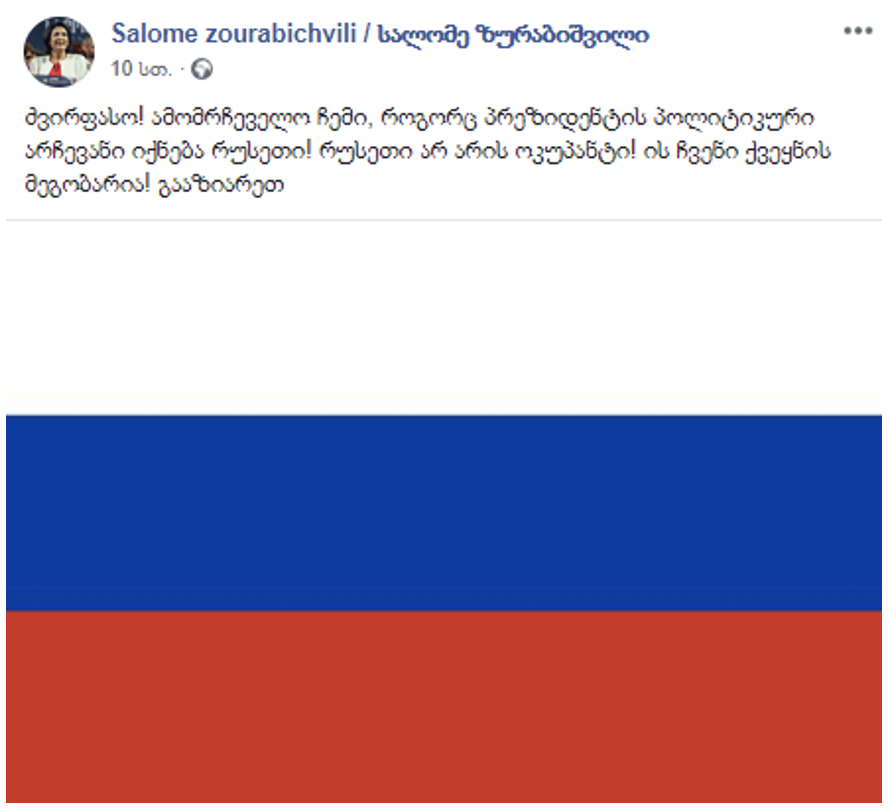 In contrast, activities of pages operating in the name of but actually against Grigol Vashadze and UNM were organized. Covertly discrediting posts were also sponsored. In addition to sharing the UNM emblem and Grigol Vashadze’s photos, to seem more convincing these pages also shared posts published by official pages of candidates but without sponsoring them. All sponsored posts contained a fake message. One of them justified violet dispersal of a rally on November 7, 2007. A post about Grigol Vashadze saying that he visited a three-year old child of a soldier that died in the 2008 war was met with sarcasm. Notably, a photo of the post with a sarcastic caption was published on a page that openly targeted the United National Movement.

During the pre-election period in 2017, a page called „Aleksandre Elisashvili’s supporters“ was created on Facebook, pretending to support the independent candidate for the office of Tbilisi Mayor. One of the sponsored posts on the page seemed to respond to the UNM offer about helping to gather signatures. In particular, the post suggested that Aleko Elisashvili thanked the UNM for the offer and said that together they could defeat the Georgian Dream. At the same time, the post was accompanied with a photo of the UNM candidate, Zaal Udumashvili. Notably, Elisashvili and his election staff had not expressed such position anywhere else. The announcement posted on the fake page was also denied by Elisashvili himself. In this particular case, the false support tactic aimed to identify with the National Movement a candidate nominated by an initiative group. Notably, some online news agencies disseminated the post from the fake page as Elisashvili’s position, without verifying the information. Among them was ipress.ge, which published a news based on the post, entitled: „Elisashvili: Thank you, National Movement. Together we will defeat the [Georgian] Dream“. Similar material was also published on exclusivenews.ge.

Such tactic of false support is a type of manipulation in which instead of discreditation, malicious actors disseminate disguised messages that they have themselves created, on behalf of their opponent. They also share these messages in different pages and groups, depending on their interests, for discreditation purposes. In such case, voters that support a particular party or candidate targeted by disguised propaganda become the victim of the false support page. More specifically, Facebook users are convinced that they have liked a Facebook page of their favorite party or candidate while in fact, they become targets of their opponent’s information manipulation. Majority of posts published on these pages contain excessive, often grotesque promises and covert sarcastic messages.

Often disinformation messages and/or hyperbolized praise becomes a source of mockery of online users that like and share the content. It is easier to confuse voters this way because usually majority of posts are shared from the authentic page of the party/candidate or persons concerned, in order to dispel any suspicions about the page authenticity. After gathering supporters using such means, the page begins to disseminate posts that some supporters believe is real, while others are outraged or confused because contents of the post are not compatible with their values. This way, it is easier to create a gap between the targets of the disguised propaganda and their supporters. For achieving the goal, the method of disguised propaganda is becoming more effective compared to open dissemination of propaganda messages, which is an important challenge for the society’s resilience to information manipulations.

Social media monitoring program is implemented with the support of the Institute for Foreign Cultural Relations (IFA) of  Federal Foreign Office of the Federative Republic of Germany. The sole responsibility for the content of this article lies with the International Society for Fair Elections and Democracy (ISFED) and the views expressed herein do not necessarily reflect the donor’s position

[5] Leader of the anti-apartheid movement and first black president of South Africa, who spent 27 years in prison.