Discrediting campaign on Facebook against the protest rallies on Rustaveli Avenue

There has been an active discrediting campaign on Facebook against the protest rallies taking place following the developments of the night of June 20-21. The campaign involves Facebook pages that targeted opposition candidates and parties during the 2018 presidential election; they were also actively discrediting opposition candidate Shalva Shavgulidze ahead of the runoff of Mtatsminda by-elections in June 2019. Newly created pages and false media pages are also involved in the discreditation campaign. The use of tactics of creating Facebook pages and sponsoring posts that pretend to support a particular political force or individual has resurfaced. Additionally, the campaign targeting the protest rallies is actively run by the pages spreading false information, propaganda and far-right narrative.

Anonymous discrediting Facebook pages were especially active in the evening of June 20. The posts contained similar messages, in some cases several pages were using the same images captioned with similar text. These posts claimed that the National Movement was going to destabilize the country and cause unrest, urging citizens to support the police.

Following dispersal of the rally, on June 21, discrediting Facebook pages started running sponsored campaigns more actively. Posts disseminated by them featured similar messages, mostly about protesters acting violently against the police. These pages spread photos and videos that essentially showed no use of force by the Special Forces. Most of these posts were sponsored.

In subsequent days of the protest, possibly coordinated sponsored campaign discrediting rally participants and organizers continued. Most often the sponsored posts indicated that the rallies were connected to the UNM. The discrediting pages mostly focused on those protesters that, according to these pages, represented the previous government. On June 22-23, several pages published a sponsored video captioned “Akhalaia’s Zonder at the rally”

The smear campaign against the protest rallies is coordinated. One of the videos discrediting the protesters was published on three different discrediting Facebook pages and one false media page called Information Page. The video showed an individual who possibly had mental health problems or was under the influence. The video was posted on three different pages within five minutes, reinforcing the suspicion that these pages are connected and administrated as one. Notably, ISFED has already found that the Information Page is connected to the ruling party interests. On 20-26 February 2014, the page was operating under the name of Self-Government Elections / Georgian Dream and the Georgian Dream / Self-Government Elections.

The discreditation campaign is also targeting the rally organizers and especially Misha Mshvildadze. Similar to other cases, the campaign is run by disseminating sponsored posts. 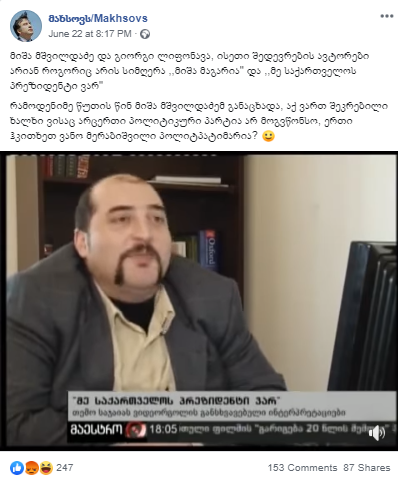 Messages that are consistent with the disinformation and propaganda pages spreading ultra-nationalistic, anti-liberal and anti-Western narrative

One of the messages of the campaign against the protest rallies on Rustaveli Avenue is homophobic. Some sponsored posts published on Facebook suggest that organizers of Tbilisi Pride are behind the rallies outside Parliament. To prove these statements they are disseminating photos of Tbilisi Pride organizers at the rally. These messages exactly match the messages of disinformation and propaganda pages spreading anti-liberal narrative. Photos published on a page called Anti-Paradox marked by its logo were also used by other discrediting pages.

A page called Nationalist’s Page specializing in spreading nationalist narrative became actively involved in the sponsored campaign targeting the protest rallies. This page is different from other pages spreading ultranationalist, anti-liberal and other narratives in that it is massively sponsoring posts. The sponsored posts published by this page are similar and often identical to those published by discrediting pages, meaning that the page too can be connected to the anonymous discrediting pages. What makes the Nationalist’s Page different from other pages spreading nationalist narrative is that it was disseminating posts supporting Salome Zourabichvili in the first round of the 2018 presidential election. 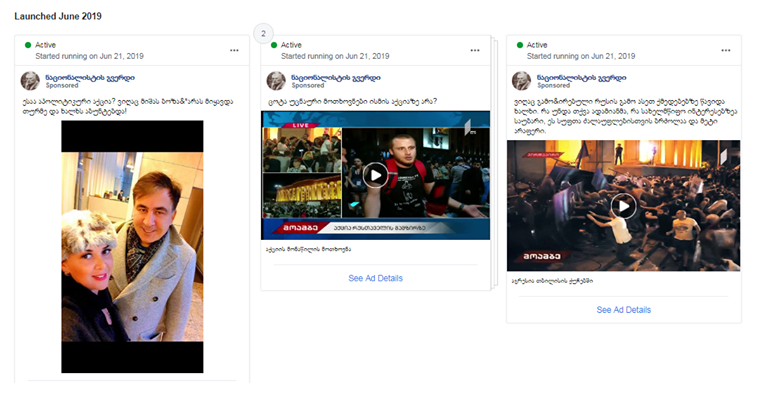 On June 24, some anonymous discrediting pages posted possibly false information about comments made by former Minister of Interior Affairs Ivane Merabishvili about the events of the night of June 20-21. According to this post, Merabishvili sent a letter from prison, which was published on Twitter by his wife Tako Salakaia. Notably, Tako Salakaia’s page cannot be found on Twitter. Additionally, Twitter doesn’t allow posting lengthy messages. None of the credible media outlets reported this informaiton. The false statement condemned use of violence by the police against protesters and supported the demand for Interior Minister Giorgi Gakharia’s resignation.

The tactic of false support

On June 22, several pages that pretend to support a particular political force or individual were set up on Facebook. Such tactics were also used during the 2018 presidential election, as identified by ISFED. ISFED found pages that, because of their names and contents of posts, seemed to support a particular party or candidate, however after analyzing contents of posts, comparing messages, monitoring sponsored posts and action plan, ISFED found that clearly they were targeting the very same subjects on behalf of which they were acting.

A page called “I Trust”, created following the events of the night of June 20-21, is using the tactic of false support. The page has a single post, published and sponsored the day the page was created. The post features photos of the UNM and the European Georgia leaders with hashtag #Itrust and urges young protesters to trust them, in order to accomplish the outcome that they seek.

The post yielded more than 10 000 interactions, including over 3400 comments most of which didn’t question credibility of the post and criticized it for calling to support the politicians.

Alongside discrediting pages, false media pages are also running the smear campaign. Contents that they post looks like news. False media tactics remain the same. They publish posts on apolitical issues as well, however subtext of all sponsored posts is supporting the authorities or discrediting their opponents.

In addition to the smear campaign, false media pages also started running a sponsored campaign in support of Giorgi Gakharia. They post sponsored posts containing a link to a Facebook group or petition supporting Gakharia. According to these posts, citizens are urging Gakharia not to resign from the office of the Interior Minister.

Clearly, the smear campaign against the protest rallies on Rustaveli Avenue is organized and coordinated, like in other cases. The various tactics employed in this process include: publishing discrediting posts, spreading unilateral information by false media pages, reporting false news and creating false pages that pretend to support a particular party or a politician. In all of these instances, the campaign is sponsored. This is an important challenge because it raises the question about illegal use of undeclared funds possibly by or in favor of a political association. Additionally, the smear campaign is also run by pages spreading disinformation and propaganda narratives. Sponsored campaigns are rare in this case, however due to large number of subscribers, their posts yield high level of interaction.