The link between covert information campaign and Government agencies

In order to support the Government of Georgia and the ruling party, there are pages on Facebook that anonymously hold the function of public relations of the government. On these pages, in addition to information on ongoing or planned projects implemented by the government, the activities, statements of the ruling party and its representatives, as well as positive evaluation of other people are published. At the same time, some of them are running a political campaign against other parties. Same Facebook pages publish political ads, for which the origin of the funds spent is not transparent. According to the observation of the International Society for Fair Elections and Democracy (ISFED), some of the Facebook pages are affiliated with the Government of Georgia and the Ministry of Defence, which are managed or coordinated by the employees Strategic Communications Departments of the agencies. 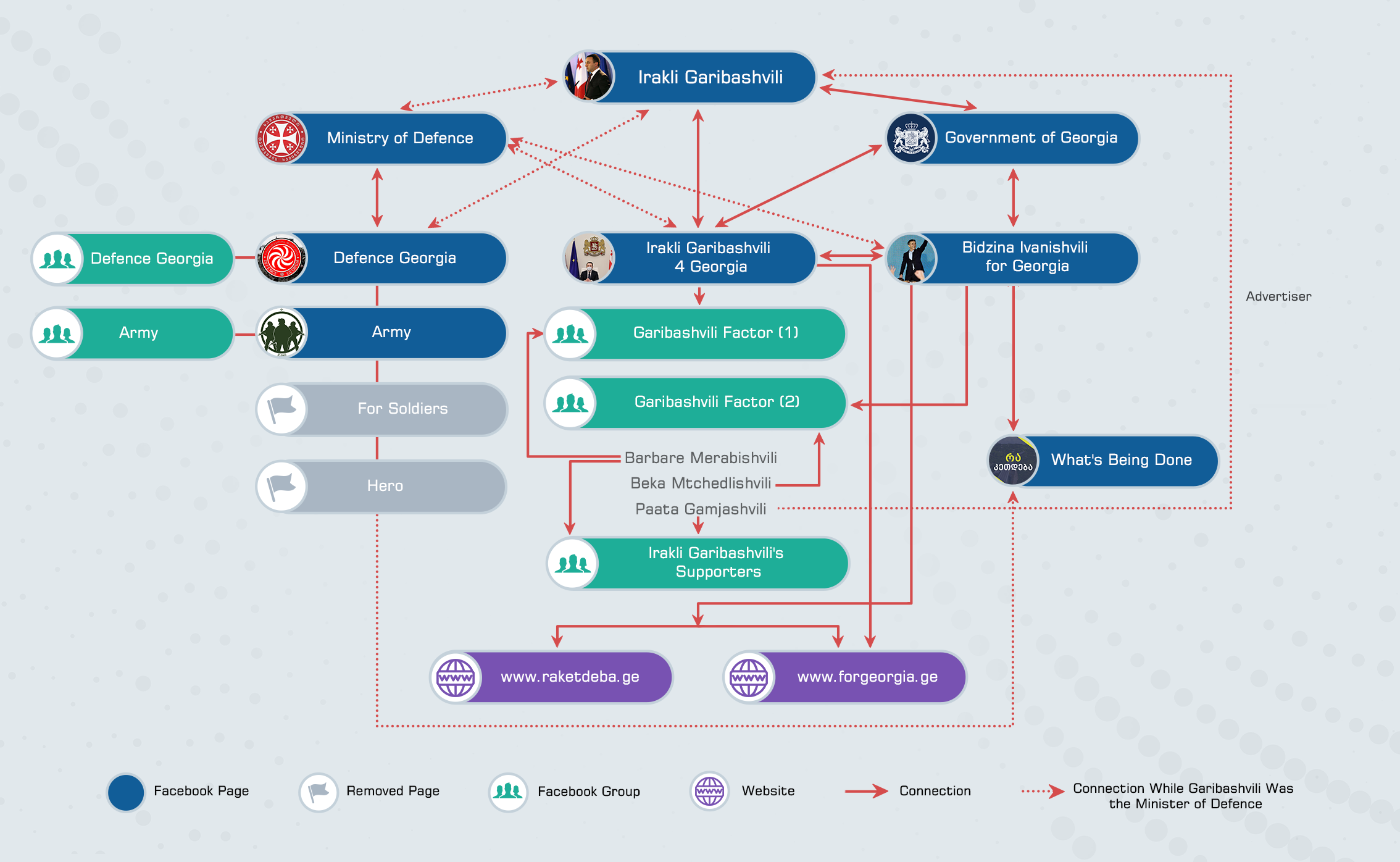 Pages and groups related to the Government of Georgia

According to ISFED, two Facebook pages are currently linked to the supporting pages of the Georgian government and the Prime Minister: "Bidzina Ivanishvili for Georgia" and "Irakli Garibashvili 4 Georgia". The mentioned Facebook pages spread information about the activities of the government and the comments of the representatives of the ruling party and, at the same time, spread discrediting messages regarding other parties and opposition politicians. On these pages, published Facebook lives or videos are cross-posted from the official Facebook pages of the Government of Georgia and Prime Minister Irakli Garibashvili.

It should be noted, that the launch of videos’ CrossPosting from unofficial website of the Government of Georgia started after the appointment of Irakli Garibashvili as the Prime Minister of Georgia. Prior to that, the mentioned pages were related to the Ministry of Defense of Georgia. During this period, Garibashvili was holding the position of Minister of Defense. The abovementioned facts indicate that Government agencies are coordinating or managing Facebook pages involved in an anonymous campaign. 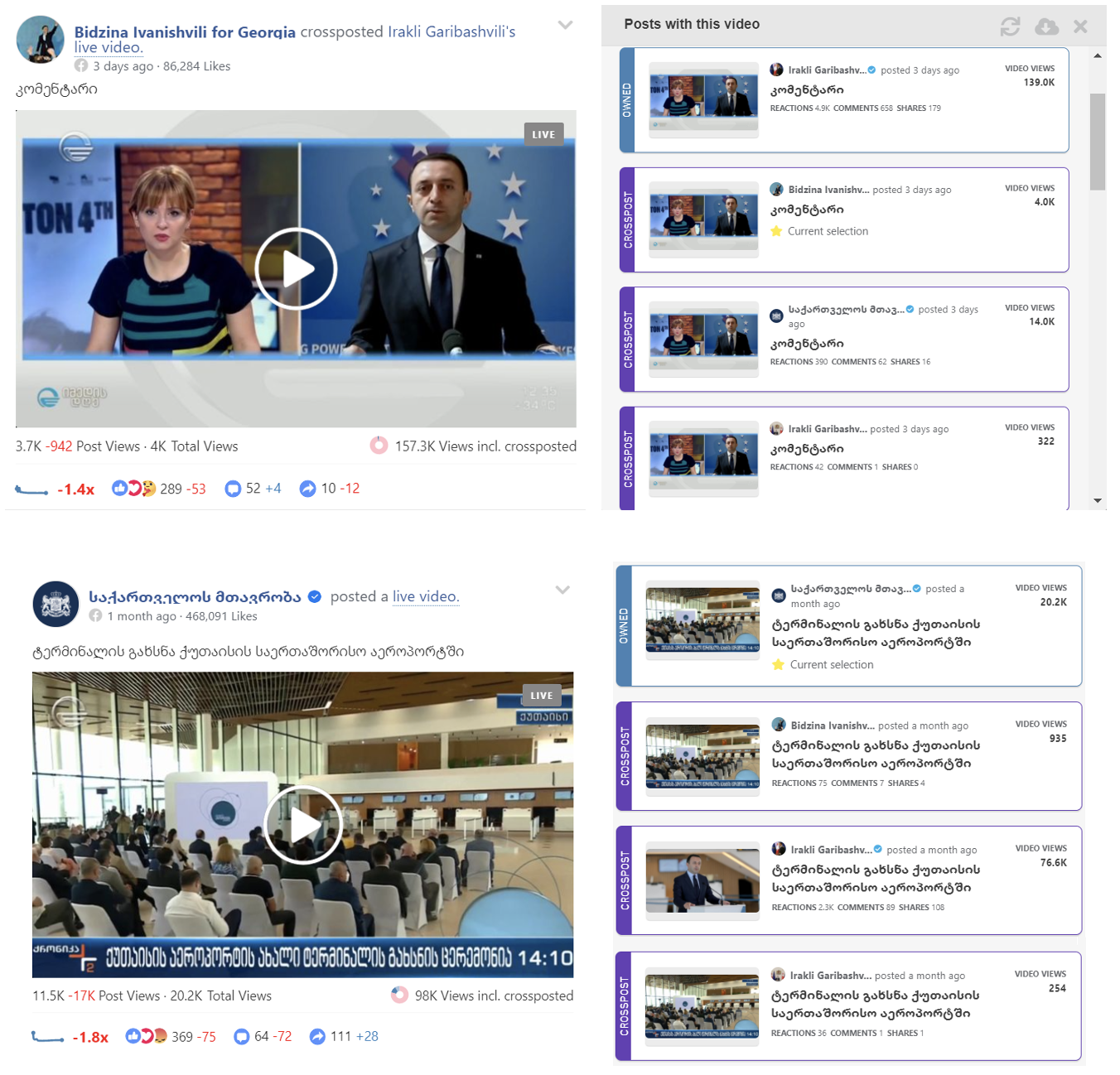 For the pages "Bidzina Ivanishvili for Georgia" and "Irakli Garibashvili 4 Georgia" content with small differences but same design are created. The mentioned pages and Irakli Garibashvili's support groups simultaneously joined the campaign in support of the Prime Minister, after the death of Alexander Lashkarava, the cameraman who was beaten by the violent groups during the July 5th, anti-pride protests. 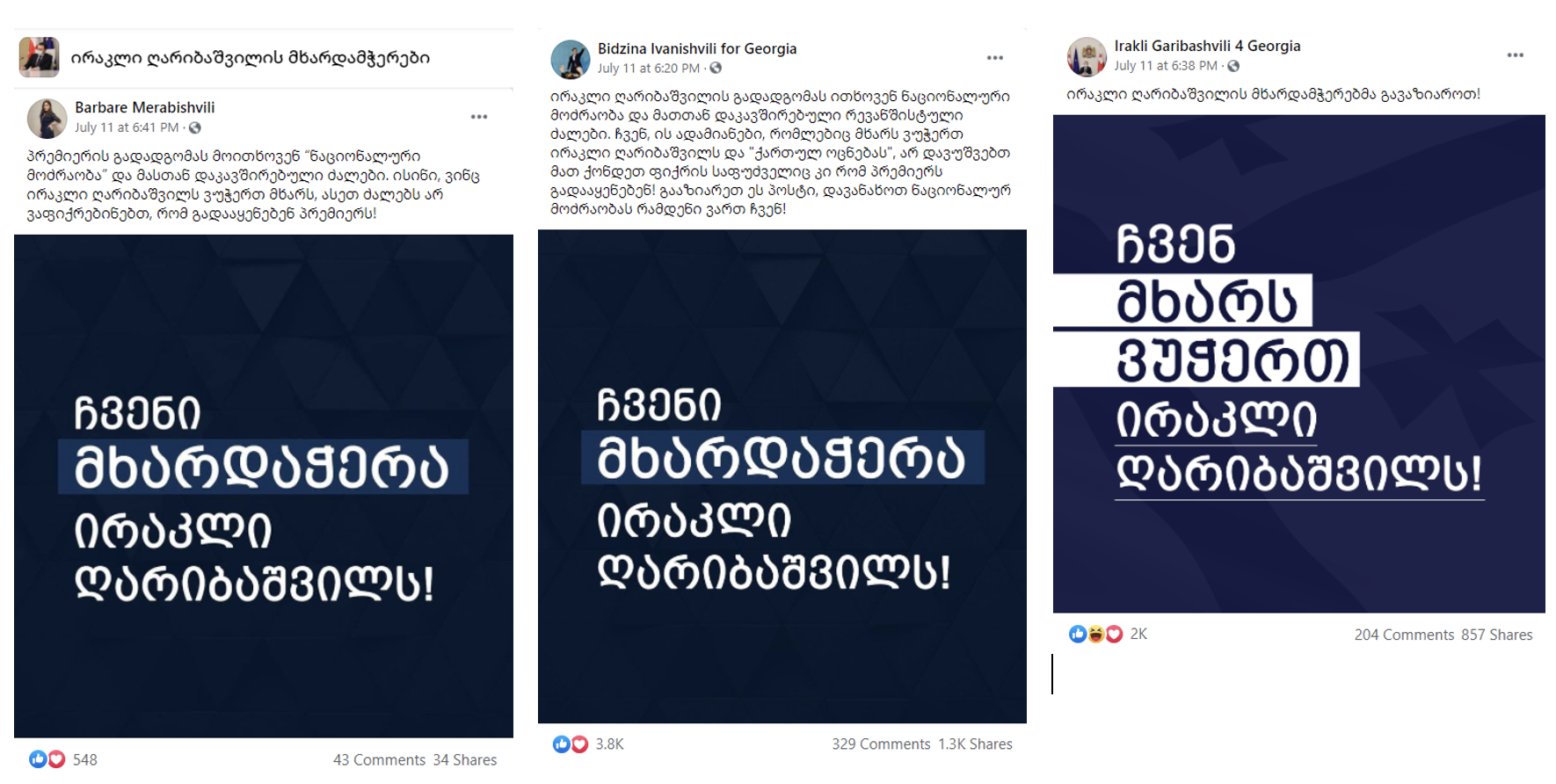 The Facebook groups affiliated to the pages also indicate the link between supporting Facebook pages and the Georgian government administration. The Facebook page "Bidzina Ivanishvili for Georgia" runs a group of Irakli Garibashvili's supporters, the "Garibashvili Factor" (until April 28, 2021, the group operated under the name "Bidzina Ivanishvili Supporters").  Along with the page, the group is run on behalf of Beka Mchedlishvili, Deputy Head of the Strategic Communications Department of the Government of Georgia. 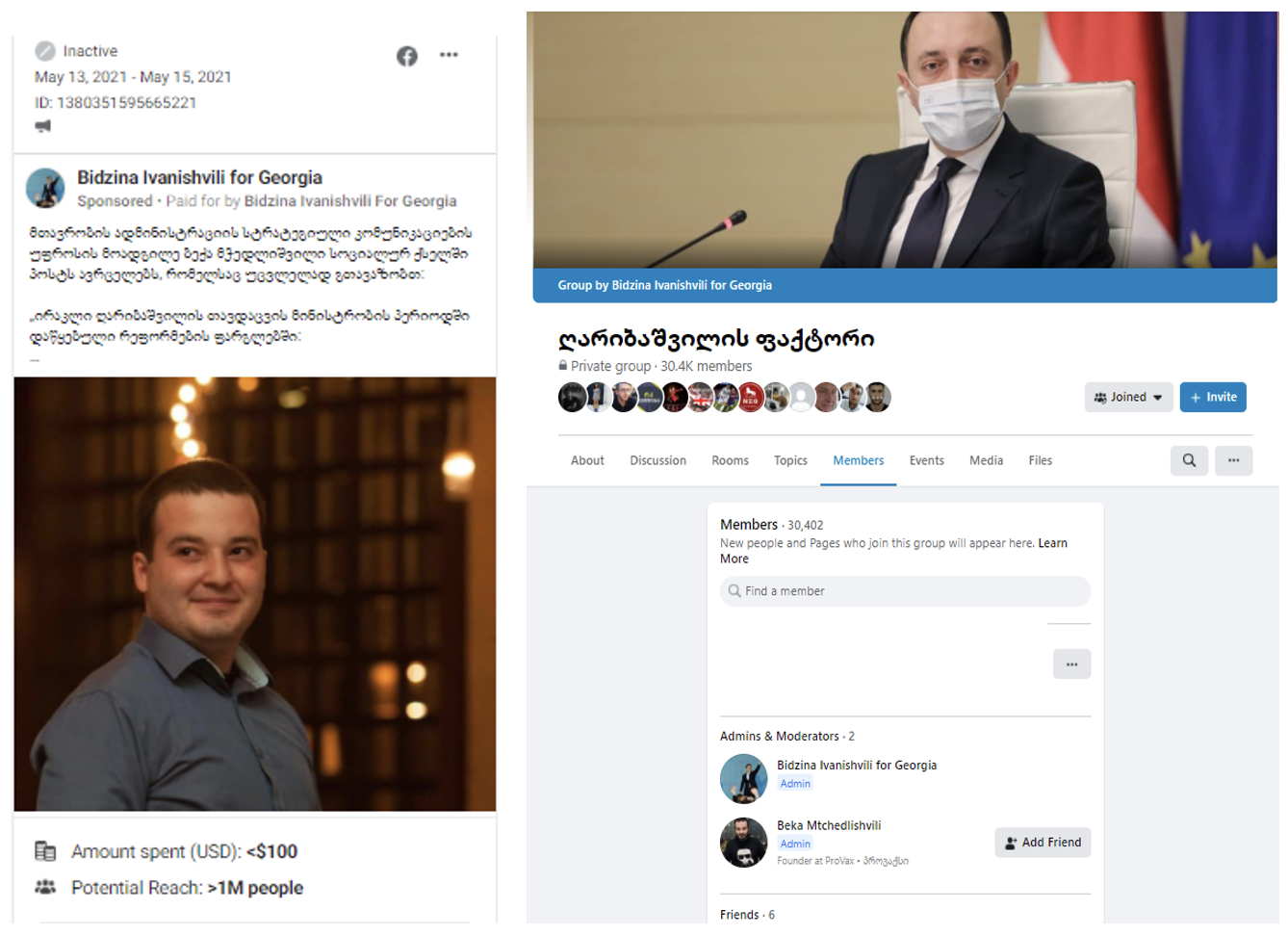 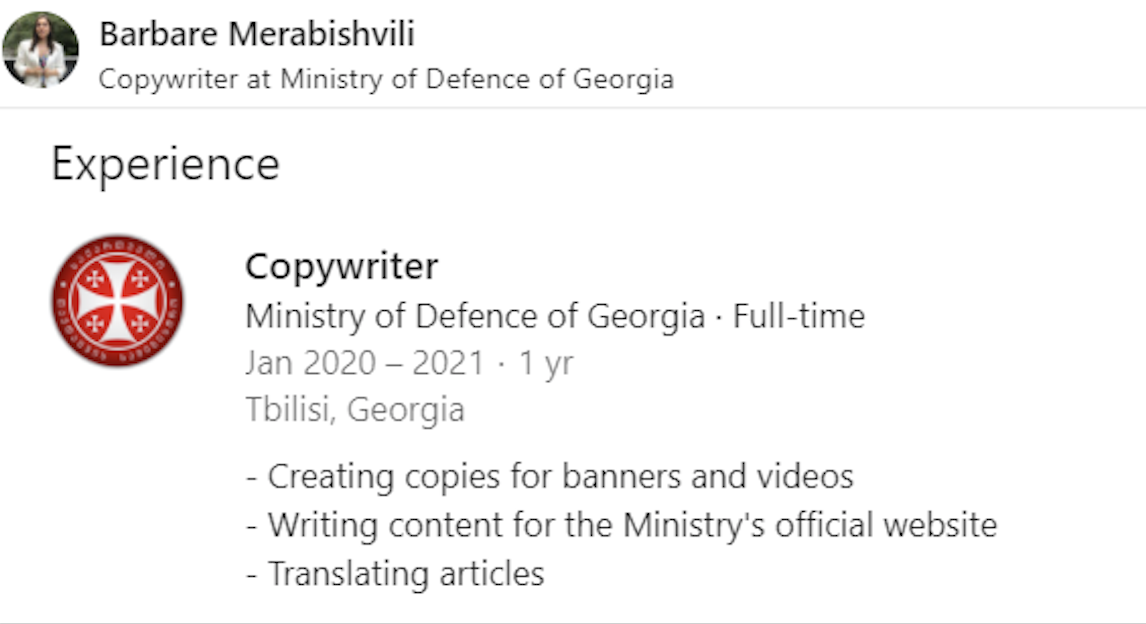 Two more groups are operating on Facebook under the name "Gharibashvili Factor", one of which is administered by page "Irakli Garibashvili 4 Georgia" and Barbare Merabishvili. The mentioned group was established on February 16 of the current year. According Mrs.Merabishvli’s Liknedin profile, she has been working in the Department of Defense since January 2020. The e-mail address of Mrs.Merabishvili was also displayed on the Facebook ads of the Ministry of Defence’s StratCom page.  The last advertisement with her contact information was published on the StratCom page on February 14, 2021, and now different information is indicated. At the same time, it should be noted that Mrs.Merabishvili to this day continues to spread news about Irakli Garibashvili in groups.

On April 30, 2021, the group “Employment and Vacancies in Tbilisi” was renamed as another “Garibashvili Factor”. The group’s aim is to spread information about Mr.Garibashvili’s activities. The content in the group is mostly shared by Barbare Merabishvili. 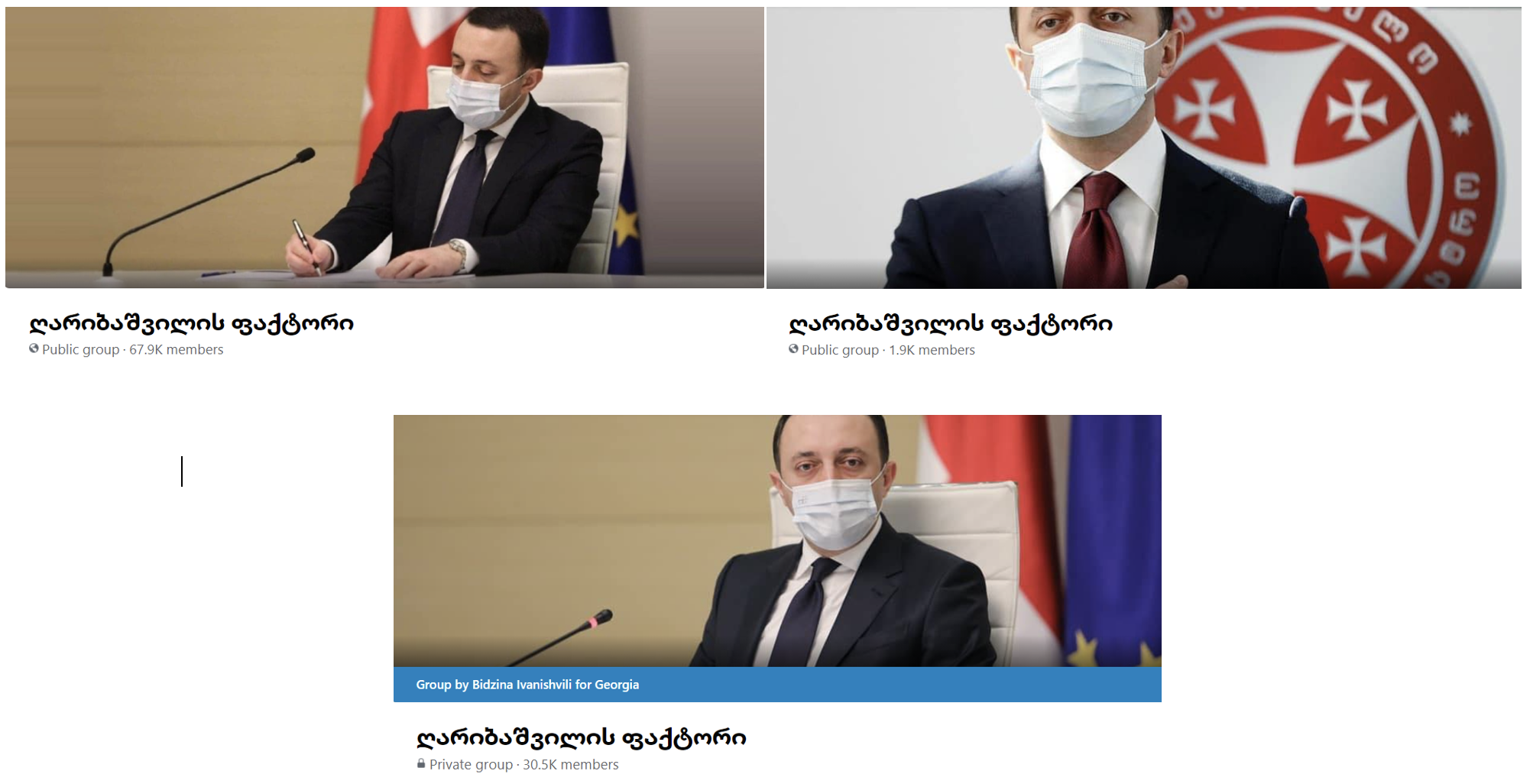 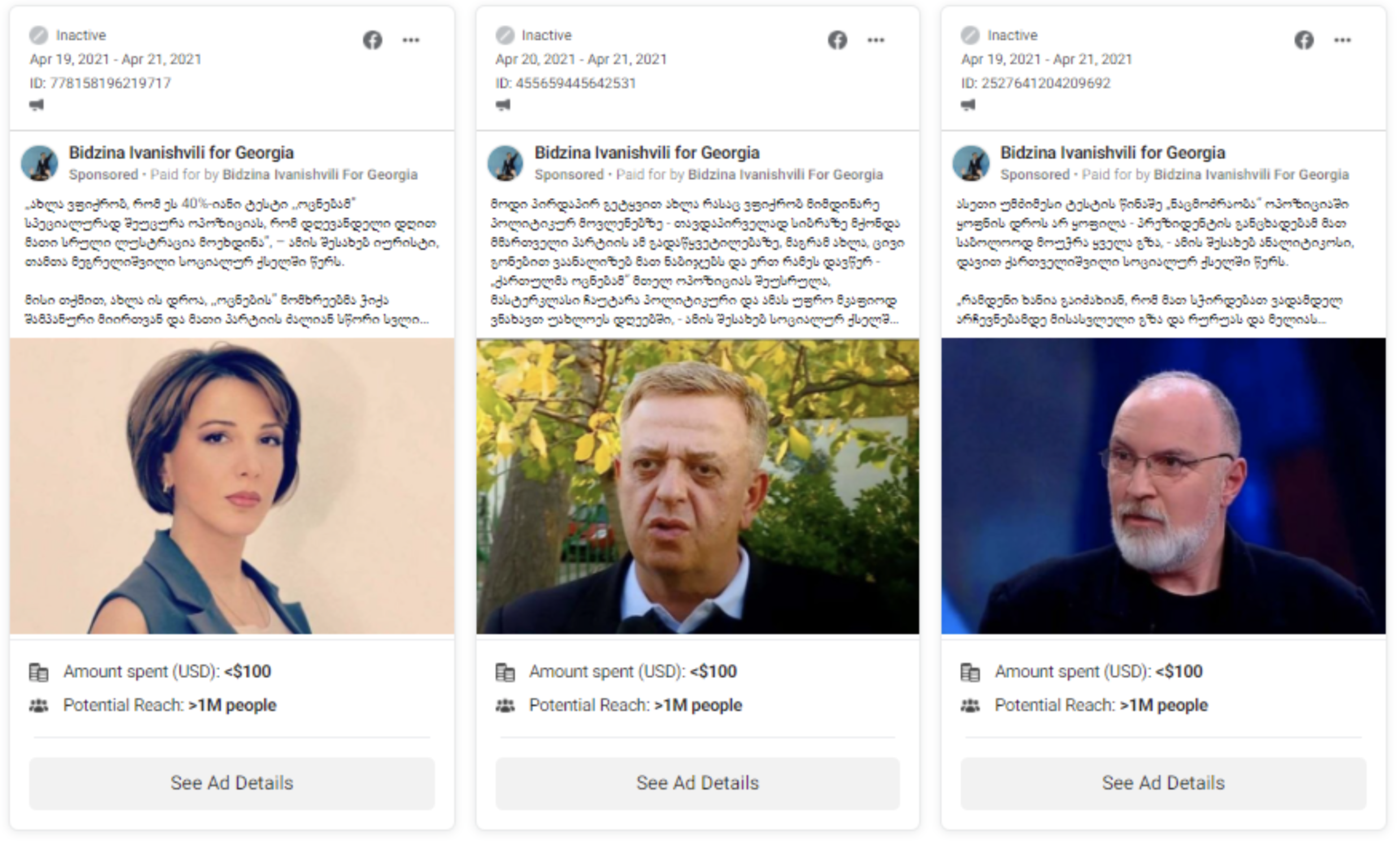 In one of the sponsored posts, the page "Bidzina Ivanishvili for Georgia" called on subscribers to join the group "Supporters of Irakli Garibashvili". The group was created on March 15, 2021 and is managed by the personal accounts of Barbare Merabishvili and Paata Gamjashvili.

In early april, Mr.Gamjashvili's workplace on facebook profile was indicated the Ministry of Defense, but the information was deleted later. At the same time, in the period of August-October 2020, posts sponsored on Irakli Garibashvili's official Facebook page had the disclaimer with Mr.Gamjashvili’s name and e-mail address.  From November 2020 to March 2021, when the ads on the page were published with the disclaimer of Irakli Garibashvili and the Stratcom of the Ministry of Defense, Gamjashvili's contact information was still indicated. 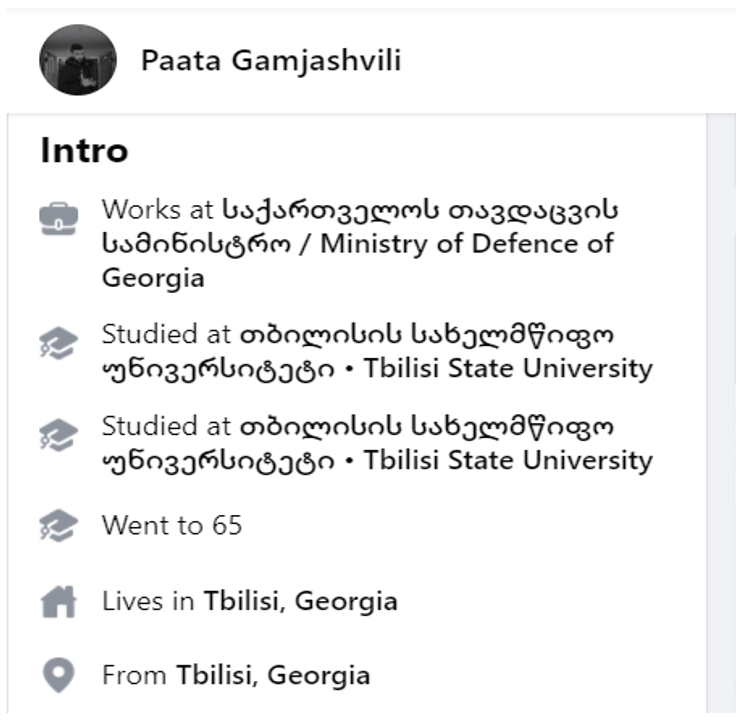 Additional indication of the links between pages Bidzina Ivanishvili for Georgia" and "Irakli Garibashvili 4 Georgia" is the website ForGeorgia.ge. The portal was created on March 24, 2021 and mainly publishes positive news about Irakli Garibashvili and the “Cartu Fund”. This site shares the windows of the above-mentioned two Facebook pages related to the Government of Georgia. Both of them point to Forgeorgia.ge as the website address in the ‘about’ page section.

The connection between the pages and the site is also obvious with the pro-government portal Raketdeba.ge [What is done]. Along with the identical visual side of Forgeorgia.ge, it has a similar goal - to publish news about implemented and ongoing projects by the government. The portal was created on March 6, 2020, but is currently unavailable. The Facebook page of same name is valid from November 17, 2018. It should be noted that the web portal raketdeba.ge is also advertised on the Facebook page "Bidzina Ivanishvili for Georgia". 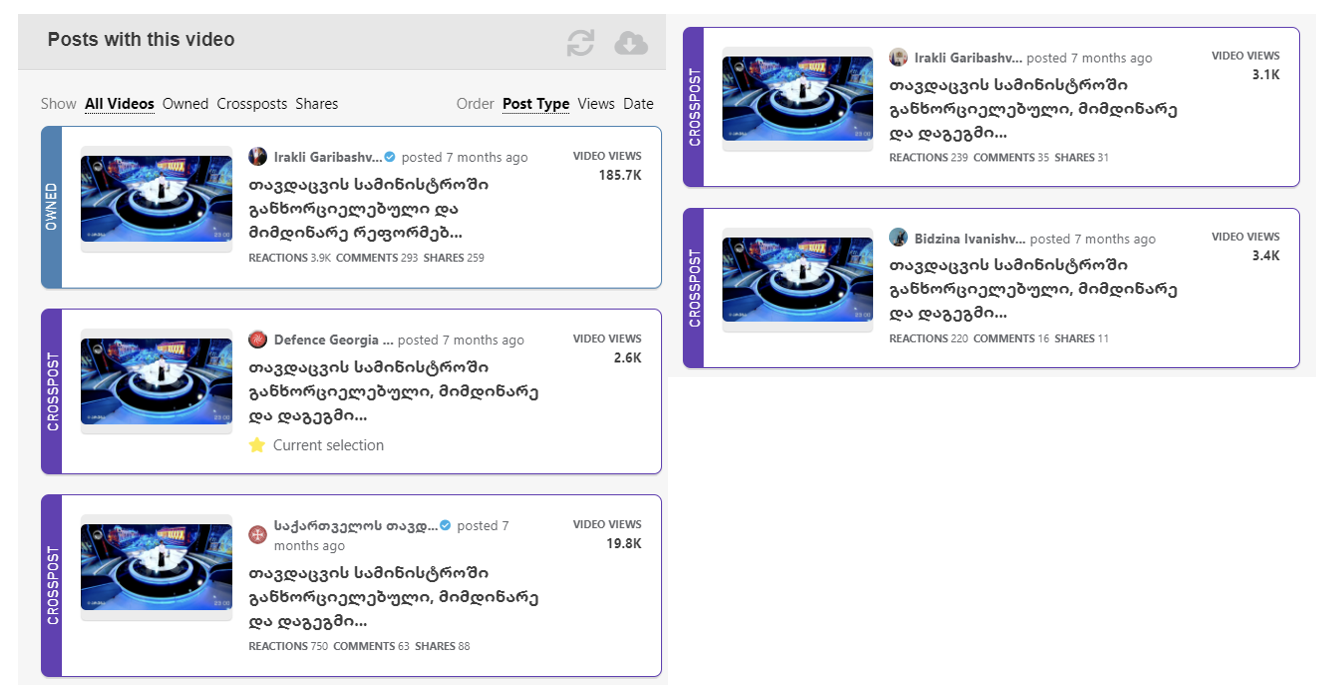 The pages "Hero" and "Army" were created on the same day, on September 29, 2019, which was followed by the creation of the page "Soldiers". It should be noted, that the previously created Facebook page "Defense Georgia" - in October and November 2019, in parallel with the systematic sharing of "Army" posts, called on Facebook users to like that page. In addition, in February of this year, the page "Army" published a link of the group "Garibashvili Factor" (administrators: Barbare Merabishvili and Facebook page - "Irakli Garibashvili 4 Georgia") calling on for membership in it, which indicates coordination between them. 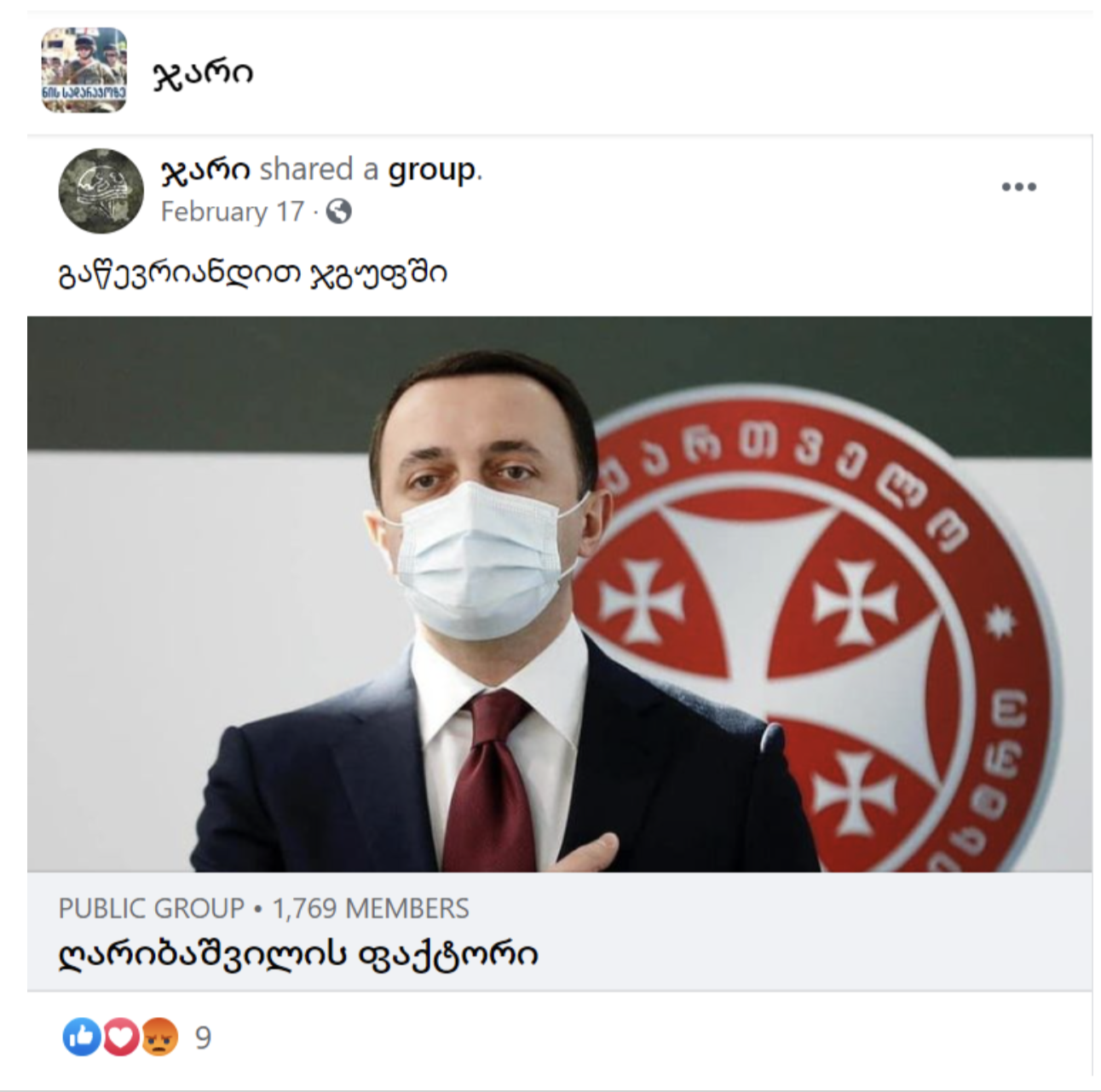 The same design of materials was periodically observed on all pages, which coincided with the design of the posts published by the Ministry of Defense and its StratCom. Thus, the impression remains that the posts for the pages have been created by one person/group of people with a slightly different design. 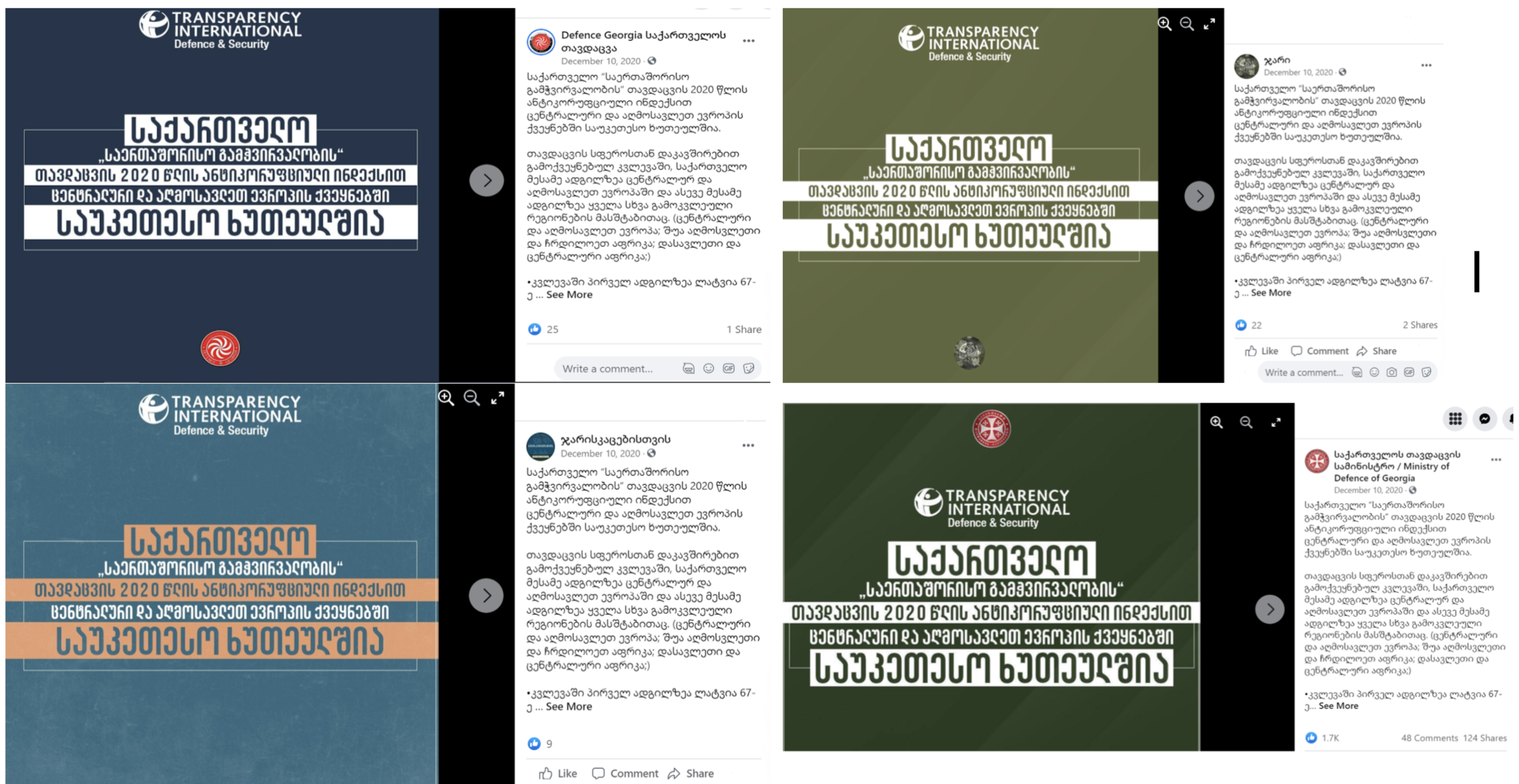 It should be noted that Nikoloz Molodinashvili, Head of the Strategic Communications and Public Relations Department of the Ministry of Defense, shared posts on his personal Facebook account from the following pages: "Army", "Irakli Garibashvili 4 Georgia", "Defense Georgia", Bidzina Ivanishvili for Georgia, "What is done".

Currently, two pages - "Hero" and "Soldiers" are inaccessible, but some of the pages are still active. They mainly publish information about the projects planned by the Ministry of Defense and the activities of the new Ministry. As publicly indicated on personal accounts,  the page  Defense Georgia" is managed by accounts:  George Mindiashvili, Giorgi Bidzinashvili, Khalatashvili Dima and George Shioshvili. Along with the page, accounts administer group with the same name.

What is the purpose of StratComs?

The Department of Strategic Communications and Public Relations of the Ministry of Defense is one of the structural subdivisions of the Ministry. The description of the Facebook page of the Stratcom indicates that one of the main components of the department is fight against disinformation and fake news. Tasks of the Stratcom includes to public relations with media, state and non-governmental organizations; study of public opinion and raising awareness about cooperation with NATO. One of the competencies of the department is to provide information, monitor and update the official website and social networks of the Ministry. The main tasks of the Department of Strategic Communications of the Government coincide with the objectives of the Department of the Ministry of Defense: to develop a unified government communication strategy, relations with the media and organizations, etc. Hovewer, the link of non-official supporting pages and groups with staff members of StratCom and posting of undeclared advertisements raises the suspicion that the resources of the agencies that should be used to deal with the above issues are not properly used.

The activity of the coordinated pages and groups indicates that the Government's StratCom is using Facebook to act in the interests of the Georgian Dream party and is linked to an anonymous PR campaign in favor of the ruling party and its leaders. The connection of such covert activity with the Ministry of Defense largely coincides with the period of Irakli Garibashvili's serving as Minister of Defense. The time of transfer from the mentioned coordination body to the supporting pages to the government administration coincides with the period of transfer of the Deputy Head of the Stratcom of the Ministry of Defense to the government administration. The use of Facebook's CrossPosting feature is a revelation of the coordination between the official and support pages and the common narratives they spread. The origin of the money spent on page advertisements related currently with government, and in the past the Ministry of Defense, is also unknown. The information presented in this document, as a whole, raises serious doubts that we are dealing with misuse of public resources.

Social media monitoring program is implemented with the support of the Institute for Foreign Cultural Relations (IFA) of Federal Foreign Office of the Federative Republic of Germany. The sole responsibility for the content of this article lies with the International Society for Fair Elections and Democracy (ISFED) and the views expressed herein do not necessarily reflect the donor’s position.